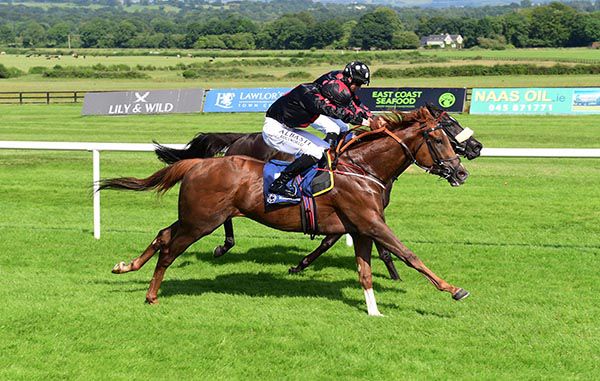 A winner in his own age group at Fairyhouse last month, the Dandy Man 3-year-old just got the better of a final furlong duel to edge out 66/1 outsider Indian Raj by a nose.

Winning trainer Natalia Lupini, based near Banbridge in County Down, has done well with hardy sprint handicapper Blairmayne in recent years and said of her winner: "He's been in good form since he won at Fairyhouse.

"The last time he ran at Dundalk (over 7f) he wasn't beaten far and we thought dropping back to six furlongs would suit him.

“He travelled into the race lovely, Gavin got him settled well and he always does his best work at the end.

“He's very genuine and tough and hopefully he'll progress and we can get him competing at premier handicap level by the end of the year.

“At the moment I think his trip is six furlongs. Once he learns to settle a bit better we can think about stepping up.

"I don't think he'll have any problem staying seven, it's just a matter of getting him to settle and a faster pace suits better at this stage.”