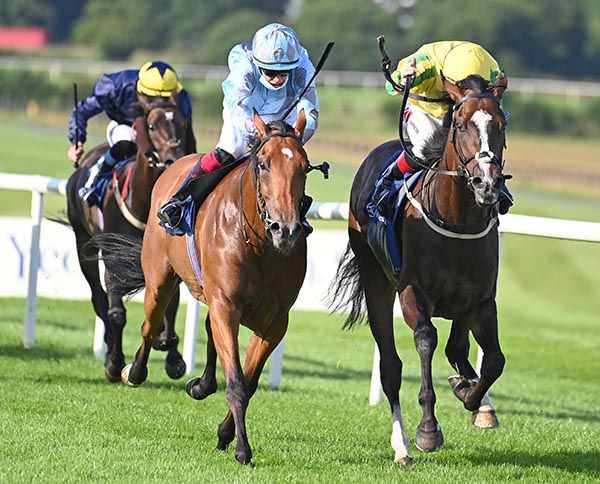 Mr Wendell (11/2) won the Naas Race To Help Barretstown Children August 2nd Race to give Ger Lyons and Colin Keane doubles on the card after Recurrent Dream in the opener.

The winner and second home San Andreas (11/2) tracked a fast pace before moving past the wilting leaders over a furlong out. The pair had a good tussle from that point with the Excelebration 4-year-old just gaining the advantage close home to score by a head.

The 2/1 favourite Monaasib never looked like getting involved and finished a disappointing fifth.

Twice a winner at Gowran Park last term, Mr Wendell was bouncing back from a poor run at Leopardstown in the spring where he dropped right out to finish last in Listed company.

Shane Lyons, assistant to his brother Ger, was delighted with the victory as he explained: “This is a massive team effort to get him here today. We don't know what happened to him in Leopardstown but he ran very free and just boiled over.

“We had to take him back and start from scratch. We took him down the road to Robert Power's and he loose schooled him and did little bits and pieces out of his routine.

“Our head man Martin Horan rides him out on his own at home. He's not easy and he's done a fantastic job. The only time Colin sits on him is if he's giving him a blow or at the track.

“We thought that he'd blow up two out today and we were just trying to get him to come here and enjoy himself, to put a nice taste in his mouth and start again.

“His class has come to the fore. He's a big unit and he's a nice horse. He has a big rating as well.

“He's after having a good blow there and he will improve. We won't make any plans, we'll get him back, see how he comes out of this race and start again.

“He's obviously has plenty of ability. It's a big pat on the back for everybody at home as it was a real joint effort.”

Talacre gave Ger Lyons a quick double at Cork, and an across the card treble on the day, when asserting in fine style to land the three-runner median auction race.

Well backed Society does the business

New Society was well supported before racing and justified that confidence with a game front-running performance in the apprentice handicap at Down Royal.

Frenetic back on track on better ground

The Ger Lyons-trained Frenetic gave weight and a beating to a good field of sprinters in the Doneraile Handicap at Cork this evening.

Reality proves the Master again at Down Royal

The Joseph O'Brien-trained Master Of Reality bagged back-to-back victories in Her Majesty's Plate at Down Royal this evening with a fine front-running performance.