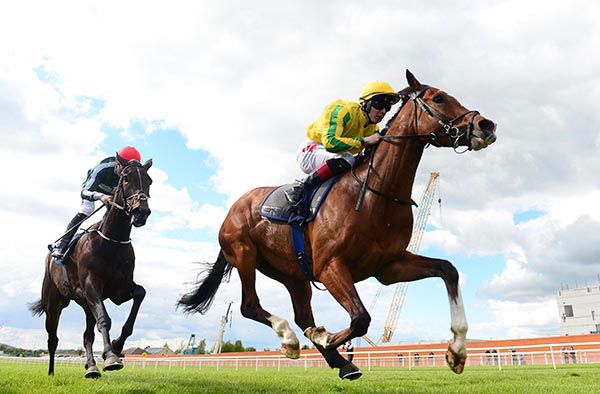 Inscribe completed a double at the Curragh for Ger Lyons and Colin Keane, as he took the Plusvital Energene Q-10 Handicap.

Bought by Gaelic Bloodstock for 14,000 pounds at Goffs last May, the son of Harlan's Holiday won at Gowran and Naas last year.

He was second to Warnaq on his return to action at Navan last month, and sent off the 3/1 favourite today, he was settled on the inner behind the front-running Rickrack.

He closed on the leader from the three furlong pole, and was pushed along to lead inside the final furlong, keeping on best from there to score by a length.

The well-backed Rickrack (6s to 10/3) had to settle for second under Colm O'Donoghue for Jessica Harrington, while Spruce Meadows (16/1) was six and a half lengths back in third with Gary Halpin aboard for Johnny Feane.

Lyons, who was earlier on the mark with Ardhoomey, said afterwards: "That was lovely. We think there is a nice handicap in him, but for him to get into the handicaps that we like, he had to win something like this.

"He's done it well and he'll improve. Ten is his optimum trip and any ground bar fast I'd say. We like this horse.

"The races we were picking for him were stepping stones."

* W.J. Lee, rider of Toulson (GB) trained by C.Byrnes, reported to the Clerk of Scales that his mount did not get a clear run in the straight.