Lyons and Keane double up with Elzaam Tales 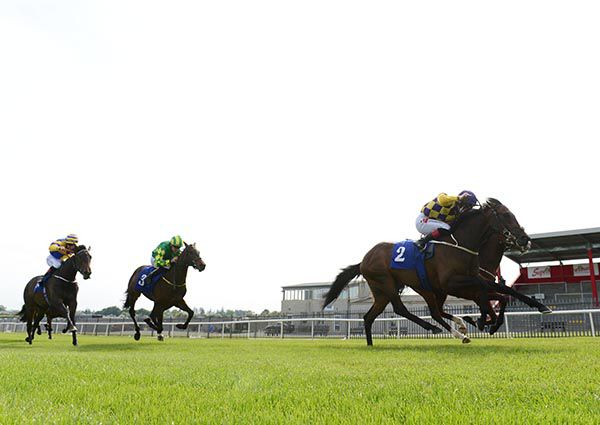 The 13/8 favourite gave Ger Lyons and Colin Keane a quick-fire double as they also took the opener with Thunder Rain.

The Elzaam colt broke well to lead as Heavenly Body missed the kick and Mambo Beauty reared as the stalls opened ruining any chance she had.

He was pressed by a free-running The Insider after three furlongs but had that rival in trouble with a quarter of a mile to travel.

Keane got a lefthander into his mount to straighten him up and he kept on best to score by a neck from Daisy Peers (11/1) who ran on well in the final 100 yards. Joe Masseria gave best in the closing stages to finish third at 18/1.

Assistant trainer Shane Lyons said: “He had to do it the hard way and he's as green as grass.

“He has come on from his first run but he didn't really learn much from it and today was nearly like his first outing.

“He'll come on an awful lot from it. He's a nice horse going forward and his main objective will be the Ballyhane Stakes. We want to support that as he's by Joe Foley's stallion.

“Hopefully he improves with that race in mind and we'll have fun in between.”

Wedding anniversary win for the Faheys at Gowran

Formerly with Alan Fleming and Leanne Breen Leviosa struck on her second outing for Seamus Fahey to register a 33/1 surprise in division one of the Leighlinbridge Handicap at Gowran.