Made bounces back to winning ways 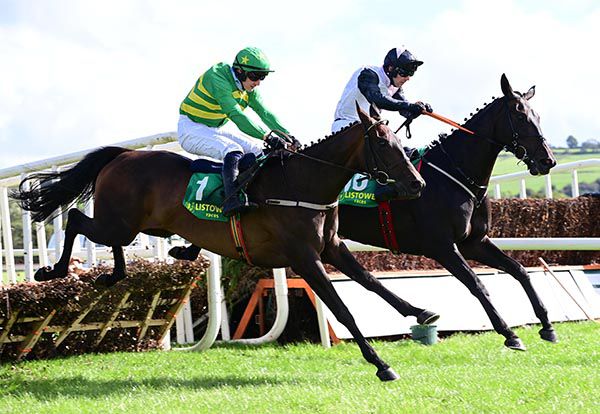 French Made bounced back to wining ways when staying on stoutly to claim the Irish Stallion Farms EBF Mares Hurdle at Listowel.

The Willie Mullins-trained mare was a Grade 2 winner as a juvenile but had been out of action since June 2019 before her return at the Galway festival.

She had finished well beaten in handicap company at Ballybrit but stepped forward from that run this afternoon.

Paul Townend held his mount up in the two-and-a-half mile contest before delivering her challenge at the second last flight.

The 13/8 favourite got the better long-time leader Say Goodbye shortly after the last and galloped on strongly to post a length-and-a-half winning margin.

"She needed the run in Galway and was improving at home all the time,” said Mullins.

“I think it was a very fast race and it fell into her lap a little bit - the ones in front were keen to get on with it and Paul sat out and waited for the race to come back to him which it did eventually.

"I'd have no trouble going out in trip with her as she looked caught for toe over the first couple of hurdles.

"She will go back up in grade at some stage and we'll try and win what we can over the winter for her owner Sean McManus, who couldn't be here today.

"I think she'll stay over hurdles this season, she is six now but I hadn't planned going chasing."