Major Reward a name to remember 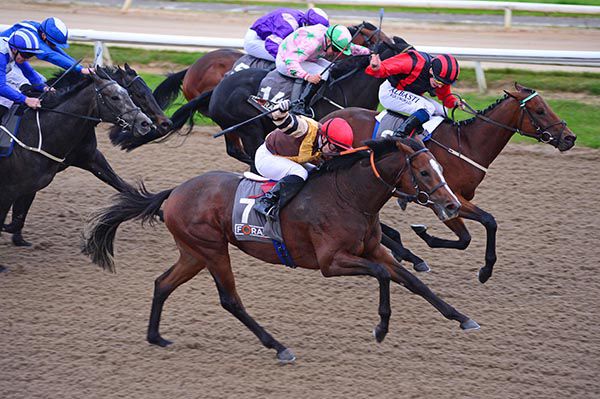 He's ridden plenty of the winners abroad in the interim but Mark Gallagher got himself off the Racing Post's Great Britain and Ireland cold jockeys list (7366 days and 153 rides) with success on impressive newcomer Major Reward in the auction maiden at Dundalk.

John Feane's Dawn Approach first-timer, backed down from fancy prices early to a returned 3/1 for this Foran Equine Irish EBF Plus 10 seven furlong heat, didn't always look like a winner under Gallagher.

Held up towards the rear, Major Reward was ridden two furlongs out, and he stayed on in eighth over a furlong out.

From there the two-year-old ran on well inside the final furlong to lead close home for a three parts of a length verdict over Will Be King.

There was the same margin then to Winiata in third, with just three and quarter lengths splitting the first eight home.

"We really like him and he's shown us a lot at home. Everything went wrong early and he was a bit green and missed the kick but Mark didn't panic and knows him well," said Feane.

"He pulled him to the outside and he took off and couldn't pull him up which is a good sign.

"I was just a little worried about the seven that it might happen a bit too quick for him. He's green but he has loads of class. He'll come on two stone for that and he'll be different gravy the next day.

"He behaved himself impeccably. He's a great attitude and a great temperament and he's something to get you up in the morning to look at. We think he's really good.

"There is a Listed (Star Appeal) race back here next week, or he could go for the final of the Foran series in Naas."