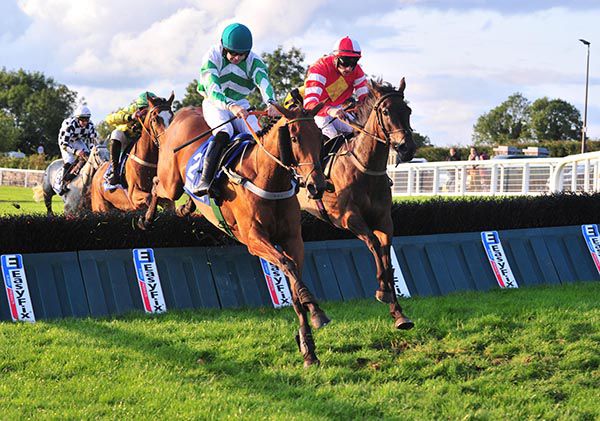 A good third over the course and distance on her last start, the Stephen Mahon trained five-year-old was well-fancied to go a few places better this evening.

Available at 11/2 in early shows, the daughter of Flemensfirth touched 4/1 on-course before going off the 3/1 favourite in the colours of the Conor & Con Partnership.

Settled in second by Kevin Brouder, she was ridden from the last and soon came with her challenge, getting to the front inside the final 150 yards, before going on to prevail by a length and a quarter.

Trendsetter (5/1) kept on well to take second under Ryan Treacy for Brian Cawley, while Silver Planeur (10/1) made late headway to take third, another three parts of a length back.

Bog War fell at the second last when still in with every chance, while he brought down Spancil Hill in the process.

"She was well-backed through the day so there was a bit of pressure on," said Mahon.

"To be honest I thought she was a bit unlucky here last time.

"She should have won then but she's made up for it now."

* The Stewards interviewed R.P. Treacy, rider of Trendsetter, concerning his use of the whip in the latter stages of this race. Evidence was heard from the rider concerned. Having viewed a recording of the race and considered the evidence the Stewards found the rider in breach of Reg.10.3.(g)(frequency) and having taken his record into account suspended him for 1 race day.

* The Stewards wished to interviewed C.J. Orr, rider of Bridge Native, concerning his use of the whip in the latter stages of this race. The rider accepted that he had three previous breaches of Reg.10.3. since the new Whip Regulations came into effect. Having considered the rider's acceptance of his disciplinary record in relation to Reg.10.3., the Stewards pursuant to Reg.10.6. referred the matter to the Referrals Committee for consideration.