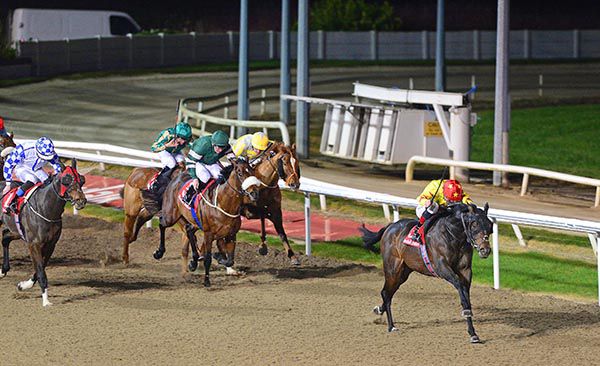 Kevin Manning rode his first winner for Joseph O'Brien when King's Vow (7/2) added to the earlier gains of his stable companions Aforementioned and Scarlet And Dove at Limerick, in the Irishinjuredjockeys.com Nursery Handicap at Dundalk.

Early Strike led in the middle of the track from two furlongs out, but he soon began wandering about and the triumphant 66-rated son of Frankel took over from a furlong out.

King's Vow wasn't long about putting his stamp on proceedings, going on for a three length verdict over Joza.

“He had a good run here the last day,” said O'Brien.

"He seems to be slowly away from the gates for some reason. He's a slow learner but he's getting there and the blinkers have been a help to him. It was nice to see him win today.

“I thought he was just green on his first couple of runs but I'd say he's just a little bit lazy and probably wants to go ten furlongs eventually.

“I'd guess he'll come back here again and then he'll go to the grass. He galloped out to the line well and I'd say he's probably learning.

“Kevin hasn't had many rides for me and it's nice to get a winner with him.”

D.P. McDonogh, rider of Esprit De Lumiere trained by Joseph Patrick O'Brien, reported to the Clerk of Scales that his mount was tight for room.