Maxwell times it right on Hours 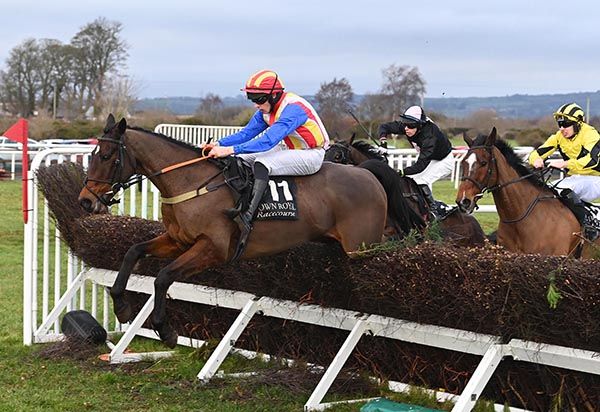 The veteran Wee Small Hours bounced back to winning ways for Michael Rice when hanging on to claim the Aspall Handcap Chase at Down Royal.

Having travelled well to lead going to the second last the 14-year-old jumped right at the fence giving Garrai Phaidin a slight bump.

The 6/1 shot stuck on gamely on the run-in, for Dillon Maxwell, and held the late charge of Aodhan May by a head.

Wee Small Hours was recording his first win since landing a handicap hurdle back in January 2018. He is owned and trained by Rice and was also bred the Dundalk timber merchant.

Maxwell said: "That was a fair effort now. We were actually coming here today thinking the ground would probably be a bit too heavy and sticky for him, but he seemed to manage it well.

"Michael told me just to hold on to him and that he jumps a bit right. He was alright over the first few and he started jumping right again. Towards the end, he was straightening up.

"He's a horse you wouldn't think is a 14-year-old, you would say he is only six or seven the way he goes on.

"He was (second in this last year) and Michael told me to watch the race back and to hold on to him for as long as I could, and not to hit the front too soon on him or else he will just pull himself up.

"That was the plan and I held on to him as long as I could. Coming to the second-last, we had still plenty of horse there, so I said I would just ask him and he found more for me. He winged the last too, so I was happy."