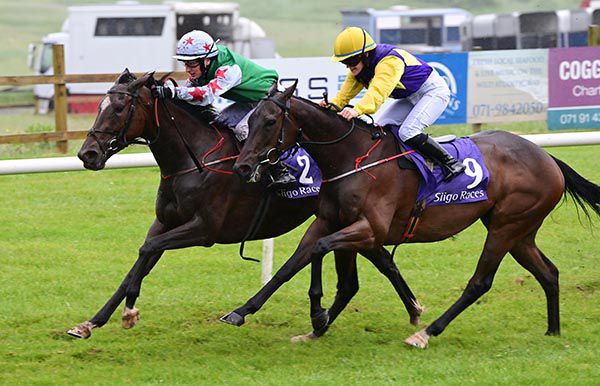 Trainer McConnell enjoyed an excellent 2020 with 33 flat winners and 15 over jumps, but has endured a quiet spell in recent months and Lady Georgie, a daughter of Lawman, was his first winner of the flat season.

The winning jockey later reported “it is good to get the winner for Dad as we went through a quiet spell since March. We had a first winner over jumps for the season recently and this is our first winner on the flat. I'm delighted for Dad and for my aunt Debbie McConnell who owns the horse.”

Regarding his own career path, he said “I'm going to do Actuarial Mathematics in DCU at the end of the summer and hopefully I can keep the riding on the side. I'm hoping to do both as I'm only 30 minutes from DCU and I'm hoping to get a balance of both.

“It is four years so hopefully it's not too intensive for the first two years and I can keep the riding up.”

Regarding Lady Georgie, he added “she’s been a bit disappointing to be honest and we ran her in a Listed race when she was two behind Fancy Blue, who ended up winning the French Oaks the next year.

“She got a rating of 85 off that so she’s been coming down (the ratings) ever since. She handled the ground and the rain may have helped her, it just loosened it up a bit. She probably just wants a bit of juice in the ground.”

Stradivarius is set to face 10 rivals in his bid for a remarkable fifth victory in Tuesday’s Al Shaqab Goodwood Cup.

Ado McGuiness has his eyes fixed on winning the COLM QUINN BMW Mile Handicap on Tuesday at Galway for the third year in a row.