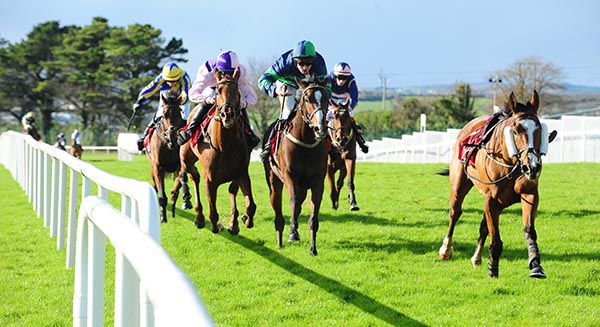 Sacchoandvanzetti (9/2) was held up well off the pace before being produced with his challenge approaching the final flight in the opening Renvyle House Hotel 3-y-o Maiden Hurdle.

Jody McGarvey drove his mount past Very Excellent (50/1) on the run-in to gain a half-length verdict, with Instant Return (20/1) another two and three quarter lengths away in third.

The 7/4 favourite Dinard Rose wasn’t beaten far in fourth, and her effort can certainly be marked up as she was badly hampered by a loose horse,when in with every chance, at the second last hurdle.

The winner, home-bred by the Ryan family, had placed form over six and seven furlongs on the Flat for Jim Bolger and was a promising fifth on his hurdling debut at the Listowel Festival.

"He met a bit of trouble and was further back than intended but they went quite hard up front. He was honest," said winning trainer John Queally.

"He proved his Listowel run was unlucky as the saddle slipped and he would have gone very close to winning. He was third to Japan, would you believe, in a maiden at Listowel on soft ground last year so that would do!

"We'll have a bit of fun with him and I've nothing in mind for him next."

No kinks in Elliott's charge as he impresses in Festival finale

As was the case at Galway earlier in the summer, it was a very different kind of Harvest Festival this year and the curtain came down on Listowel 2020 when 6/4 favourite Weseekhimhere was an impressive winner of the Brendan Daly Memorial (Pro/Am) INH Flat Race.

Princess Zoe will bid to crown her fairytale campaign with Group One glory in the Prix du Cadran at ParisLongchamp on Saturday.

Rudy Catrail (4/1) has shown himself to be a very effective front-runner on his day and made all in the Shanahan Power (QR) Handicap Chase in the hands of regular partner Shane Fenelon.

Majestic Dawn caused a 40-1 shock as he turned the bet365 Cambridgeshire into a procession under Paul Hanagan.