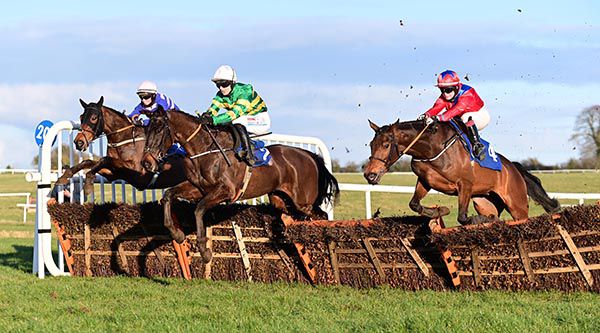 There was no trouble at all for Fighting Fit (13/8 into 6/5 favourite on the show) in the Connolly's RED MILLS Ladies Handicap Hurdle at Thurles.

Following up on his Punchestown victory from December, Fighting Fit was also doubling the score of winning owner J P McManus on the day. His Guetapan Collonges won for Charlie Longsdon at Huntingdon earlier.

The Limerick man went on to make it three with Laskadine (Ben Haslam) at Sedgefield.

At Thurles with Aine O’Connor in the plate, Philip Dempsey’s Fighting Fit was settled behind the leaders, and was sixth at the halfway stage.

He improved to challenge on the inner two out, disputing between horses before the last where he made a slight mistake.

Soon in front Fighting Fit asserted to comfortably defeat Silk Worm by five and a half lengths.

"I'm delighted he built on his Punchestown win although I don't know how strong a race it was,” said Dempsey.

"He was grand and jumped away well and she gave him a lovely ride; Aine had ridden once on Teacher's Pet for me and that was her first winner for me.

"We'll see what Frank (Berry, JP McManus' racing manager) says, he's a horse who you wouldn't pull out too quickly and wants space between his runs."