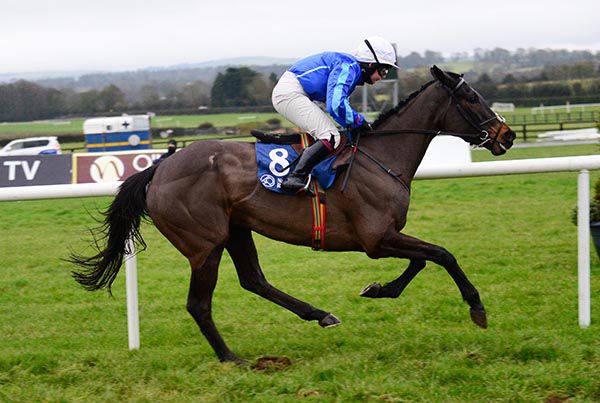 The Willie Mullins-trained Belle Metal galloped her rivals into the ground to make a winning debut in the concluding Rushe's Supervalu bumper at Naas.

Jody Townend's mount was sent to post the 9/4 favourite for the first four-year-old bumper of the year.

The daughter of Soldier Of Fortune took them along in the two-miler and had her rivals at work early in the straight.

Townend asked her to stretch clear inside the final furlong and she went on to post a 12 length victory.

Belle Metal is the second foal out of an unraced half-sister to Themoonandsixpence, who won five times for Mullins and was runner-up in the Galway Plate.

Mullins said:- “She has a nice pedigree and is by a sire that I would use again going on what this filly has done.

“That wasn’t the plan (to make the running) but Jody changed her mind at the start and thought there was no pace. She made the running at her own pace to great effect.

“We will be looking to up her in grade although the owners may be keen to sell so she could be in different colours the next day.”

It was a double on the card for the champion trainer following the earlier victory of Energumene.