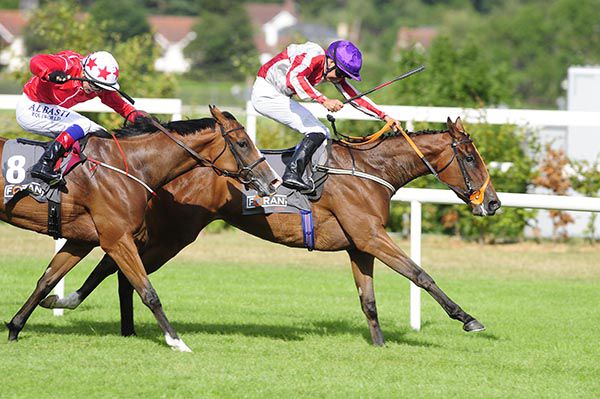 Tom Mullins is hoping to find out more about Mia Mento when the Casamento filly makes her seasonal debut in the Derrinstown Stud 1,000 Guineas Trial at Leopardstown today.

Mia Mento, owned by Phoenix Thoroughbreds, made a winning debut at this course in July and was last seen finishing third in the Listed Blenheim Stakes at Fairyhouse in September.

She steps up to a mile after running at six and seven furlongs, and how she fares will determine which route Mullins will take with her for the rest of the season. Niall McCullagh takes the ride.

“She’s in great form and we need to start her off, so we’re starting here,” said the Goresbridge handler.

“She might not get the trip but we’ll know more after Sunday.

“She wintered well and has been working well. It will be nice to get her out for her first run of the season and we’ll go from there. Sunday will tell us a lot. It’s a sort of fact-finding mission.”

Richard O’Brien is another trainer who expects a learn a lot after his recent Limerick maiden winner Dean Street Doll tries to take a leap forward.

“We’re looking forward to seeing her run on Sunday. It’s a big step up from her maiden win, but it fits in nicely — 15 days after she has won and it will be interesting for all of us to see if she’s capable of coping with that,” said O’Brien.

“If she is, that would be wonderful — we’d take that. We’ll see what Sunday brings. We’re taking that step with trepidation more than anything else.”

Fozzy Stack is keen to know where he stands with Lady Wannabe after the daughter of Camelot opened her account at Cork five weeks ago.

“She won well in Cork. We’ll know where we’re going with her after Sunday,” he said.

Michael Halford runs his promising Aga Khan-owned filly Hamariyna, who got off the mark at Tipperary last month when following up a good first run at this track.

“We were very happy with Hamariyna at Tipperary and the runner-up has come out and won since, which is nice,” said Halford.

“It is a big step up from a maiden to Group Three class, but she is a filly we like a lot and Sunday should mark our card for the rest of the year.

“She is a filly that will probably stay further but deserves her chance at this level over a mile.”

Aidan O’Brien is doubly represented with Fire Fly and Mona Lisa’s Smile, while Dermot Weld saddles Titanium Sky as he attempts to win this race for a seventh time.

Stack reports Zihba to be in good shape as he bids to repeat last year’s success in the Comer Group Amethyst Stakes.

The Choisir colt warmed up for another crack at this Group Three heat when putting up an encouraging performance to finish second to Imaging early last month.

“He won it last year and seems in good order. He ran well when second in a Listed there on his return last month,” said Stack. “Hopefully he should a good account of himself.”

One of Zihba’s main rivals will be Hazapour, who lifted the Derby Trial on this card 12 months ago.

Weld also has a three-year-old, Zuenoon, in the six-strong field. There is a second horse from this year’s Classic generation in Dunkirk Harbour for the Aidan O’Brien stable.

Ado McGuiness has his eyes fixed on winning the COLM QUINN BMW Mile Handicap on Tuesday at Galway for the third year in a row.