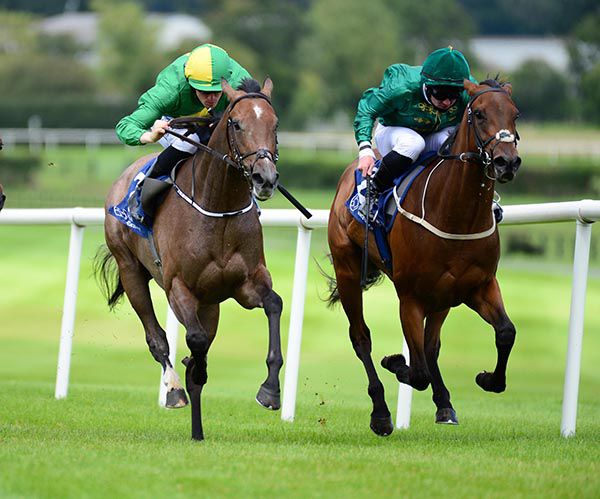 Evens favourite Frenetic blazed the trail as usual but couldn’t get away from a couple of rivals as the final furlong approached.

Miss Amulet was caught in a pocket behind the leader and Measure Of Magic on her outer.

Shane Kelly on the latter, who had beaten Miss Amulet last month at Down Royal, was determined to hold his line, but eventually there was enough room for Billy Lee’s mount to come through and collar the favourite.

Miss Amulet scored by three quarters of a length, with Measure Of Magic another length and a quarter back in third.

The winner, by Sir Prancealot, had broken her maiden at Cork earlier in July.

Winning trainer Ken Condon later stated: “Even before today she was very well bought (£7,500) by Michael O’Donoghue of the BBA, she’s a scopey filly and really progressive.

“That was wonderful, she was obviously one of the outsiders but back on a conventional track as opposed to Down Royal she’s won very well having travelled strongly.

“Billy was very pleased and said she’s getting stronger all the time and enjoying her racing as well as improving for it.

“We were 3lb better off with Johnny (Murtagh's) filly, but I don’t think that was the difference — it was more to do with the track and a bit slower ground, Naas is more demanding.”

He added: “We’ll raise our sights now, we’re never afraid to lose which is a good way to look at racing. She’ll be entered in the Lowther or something like that. We’ll look for a Group race over five or six furlongs, I’m sure she’ll get six.

“She’s obviously progressing so she’s entitled to take her chance, that was a nice performance today.

“We’ve a nice bunch of two-year-olds, a couple won first time out at the Curragh, so it’s a nice position to be in."

Winning rider Billy Lee said: “She’s been progressing with every run and the aim was to get black type today.

“I was caught in a pocket but knew that I had plenty of horse if the gap did appear I’d be able to manoeuvre out.

“When I got the gap she picked up well and has won cosy at the line.

“She’s a speedy filly who would want better ground and I think there is more to come from her.

“She might get six in time but she has more natural speed for five at the moment.”