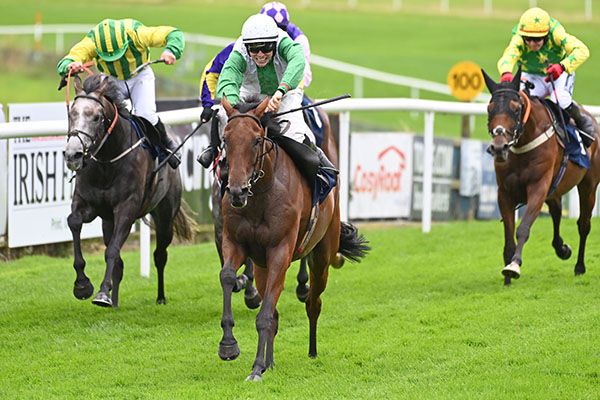 Montel Glory followed-up on his course and distance victory from last month, as he ran out a good winner of the Speckled Hen Handicap Hurdle.

The Philip Fenton trained five-year-old caught the eye when fourth on his penultimate start and was fancied to follow-up on his breakthrough success this afternoon, going off the 10/3 favourite (drifted from 11/4).

Settled towards rear of mid-division by seven-pound claimer Niall Moore, the Fame And Glory bay made good progress from three out and was briefly squeezed for room after the next.

He jumped the last behind the leaders in fourth and was soon pulled to the outside and ridden. In front inside the final 150 yards, the Jim Ryan owned victor powered up the hill, coming home two-and-three-parts of a length to the good. Darkest Hour (17/2) finished second under Phillip Enright for Mark McNiff, while the Eoin McCarthy trained Shannon Gray (14/1) was a short-head back in third.

"It looked like the gaps weren't going to come for him but he was pretty cool on him. He waited and bided his time," said Fenton.

"He'll be back here on the 29th of this month for another one of these handicaps. It's horses for courses so why not."

R. Deegan, rider of Shannon Gray trained by Eoin Christopher McCarthy, reported to the Clerk of the Scales that his mount received a bump from her inside approaching the last hurdle.

The Stewards enquired into an incident after the second last hurdle involving Alexharwill ridden by T.N. Brett, Darkest Hour, ridden by P.T. Enright, Shannon Gray, ridden by R. Deegan, and Carlotalin ridden by Thomas Reilly where it appeared that Alexharwill got tight for room on the inner. Evidence was heard from the riders concerned. In his evidence, Thomas Reilly stated that his mount jumped a little to the left and was making her way back to the rail when she was tightened between horses. R. Deegan stated that he had received a little bump earlier but had no problem at this point of the race. P.T. Enright stated that he was aware of Carlotalin on his inner and felt some contact from her. T.N. Brett stated that Carlotalin had jumped to the left and he took the opportunity of going through on her inner but got crossed when that animal made her way back towards the running rail. Having viewed the recording of the race and considered the evidence, the Stewards did not apportion blame to any rider and took no further action.

The Stewards enquired into an incident about one hundred and fifty yards from the finish involving Alexharwill, ridden by T.N. Brett, and Darkest Hour, ridden by P.T. Enright where it appeared that Alexharwill got tight for room when racing nearest to the running rail. Evidence was heard from the riders concerned. In his evidence, P.T. Enright stated that he did not feel any pressure from his inside. T.N. Brett stated that he had jumped the final hurdle upsides Darkest Hour and his mount had never left the running rail. He added that there was a gap to make a challenge but it tightened. Having viewed the recording of the race and considered the evidence, the Stewards took no further action other than to advise P.T. Enright to ride with more awareness with regard to a challenger on his inner.