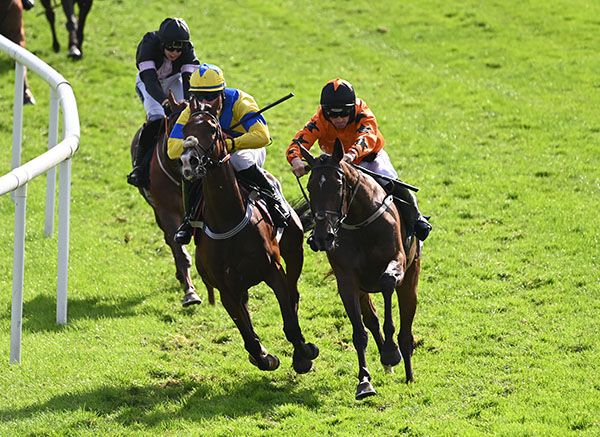 Fourth on debut at Galway, the daughter of Kalanisi since disappointed at Wexford, with both those runs coming on soft ground.

Encountering a quick surface for the first time today, the five-year-old was sent off a 10/3 chance under Patrick Mullins in the colours of owner Leo McArdle.

Sent straight to the front, she was pressed from the three furlong pole and drifted right when ridden inside the final 200 yards.

Just half-a-length and a length-and-a-half separated the first three home, with connections of the second and third both likely to feel aggrieved. Moonovercloon (2/1) and Nottodaybobo (7/4 favourite) were both impeded by the winner. The latter appeared to be coming with a renewed effort up the inner in the closing stages when his route was blocked and he ultimately had to settle for third under Harry Swan.

"The plan wasn't really to make the running but she jumped and she was enjoying herself in front," the winning rider revealed.

"She loved the track, loved the ground, and it's great for Leo McArdle who has been a long time owner of ours. It's great for him to get another winner.

"I'd imagine she'll improve over jumps as well."

In his evidence, Mr J. Kelly Smith stated that he got a bit tight for room on the inner and momentarily stopped riding which may have cost him the race. Mr H.C. Swan stated that his mount was hanging into the rail when a gap appeared but he hadn't the pace to take it and switched out to challenge.

Mr P.W. Mullins stated that his mount was hanging under the whip and he had corrected her on three occasions by steering her off Moonovercloon.

Having viewed the recording of the race and considered the evidence, the Stewards made no alteration to the Judges placings and took no further action.