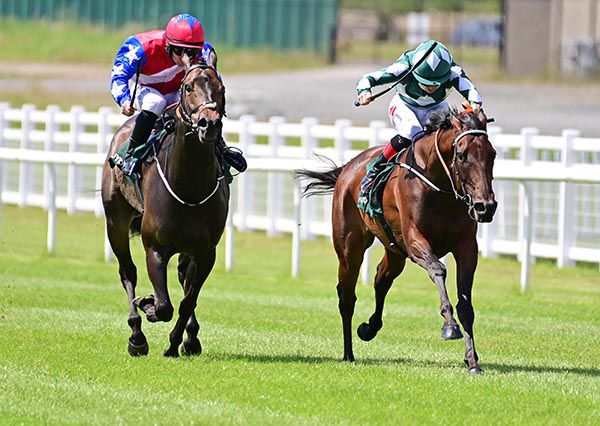 Jack Davison reports his star sprinter Mooneista in great order after going close in the Weatherbys Ireland Greenland Stakes at the Curragh on Saturday and is excited by the chance of top level success at Royal Ascot next month.

The Dandy Man filly, who was bred by the Davisons at their Killarkin Stud and carries the colours of Jack’s mother Paula, provided the young trainer with a career high at the Curragh last summer when landing the Group 2 Paddy Power Sapphire Stakes.

The four-year-old was a shade unlucky not to add a further Group 2 success in the Greenlands after being carried across the track inside the final furlong by Brad The Brief and beaten just half-a-length.

“She ran a great race in the Greenlands and has come out of it really well. She’s in great form and was striding out like a cheetah this morning. She’s great,” said the Dunboyne trainer.

“She’ll go for the Kings Stand so it’s exciting times.

“A stiff five furlongs and if they go a real good gallop who knows what can happen at the highest level with her. She’s a gem.”