Mrs Milner perfect in Pertemps for Nolan and Cooper 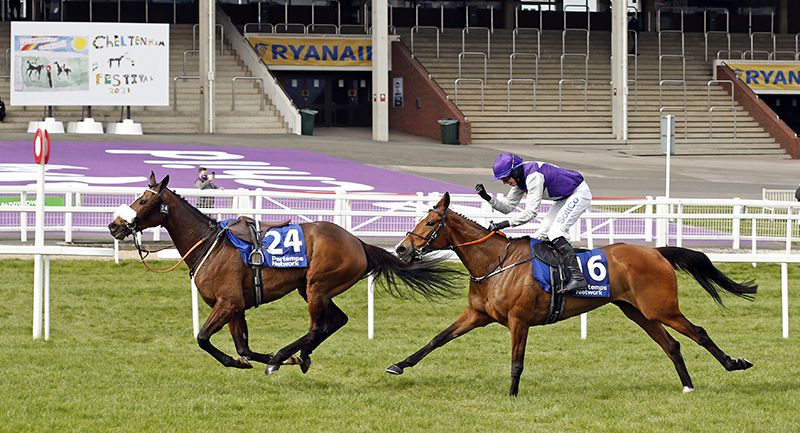 The six-year-old, trained in County Wexford by Paul Nolan, asserted on the run to the line to land the three-mile stamina test in comfortable fashion.

Redford Road and Potters Hedger were the pace-setters and there were plenty in with chances as the big field approached the penultimate flight.

Mrs Milner was produced through the pack to lead before the last. Despite the attentions of a loose horse, the 12-1 chance kept on strongly to win by five lengths from The Bosses Oscar.

Come On Teddy was half a length back in third, with another length and a half to Milliner in fourth.

Nolan said: “That was brilliant — I can’t believe the ease with which she’s done it.

“She got into a bit of bother at a few different stages of the race. It wasn’t Bryan’s fault, it was just the way things panned out. I was saying a few swear words here I can tell you!

“It was unbelievable the way she ran up the hill. I can’t believe it, to be honest.”

He went on: “She is such a tough little mare. After the fall she had in Leopardstown the last day, a lot of horses would have their head down for a week, but she just bounced straight back.

“We ran her over the wrong trip the last day, but we decided to go that way to keep her against the mares. As it’s turned out it’s probably worked out well as she might have ended up with a few more pounds on her back if she’d run in the longer race and run well.”

Nolan, saddling his first Festival winner since Noble Prince landed the inaugural running of what is now the Marsh Novices’ Chase in 2011, decided against crossing the Irish Sea this year with his solitary runner.

He added: “It’s disappointing not to be there, but it sounds like you can’t do much anyway and we’ll enjoy it the best we can from home.

“We were jumping up and down here watching the race and nearly went through the skylight!

“We’ve had a few placed horses and things since Noble Prince won. We’re lucky to have some very good owners, who are keeping us afloat.”