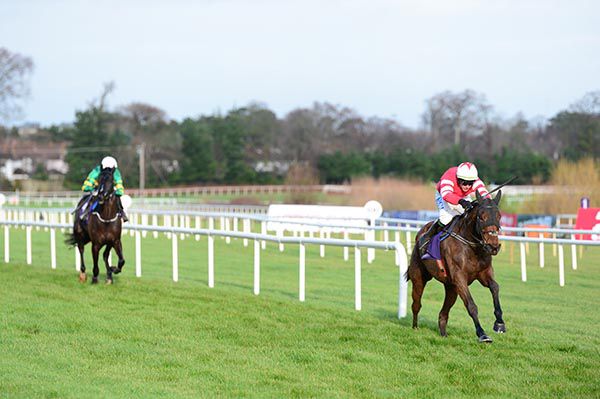 Paul Townend and Willie Mullins got off the mark for the 2019 Leopardstown Christmas Festival meeting as Mt Leinster recorded a very convincing victory in the Thorntons Recycling Maiden Hurdle.

The Beat Hollow gelding was a wide-margin winner on debut in a Ballinrobe bumper last year and, after filling the runner-up spot behind Easywork (won again at Limerick this afternoon) when switched to hurdles at Gowran Park last month, added to his tally here.

The 11/4 chance struck the front by-passing the final hurdle (due to the low lying sun) and drew clear to score by a cosy nine lengths.

The 9/4 favourite Entoucas set the pace but had no answer to the winner in the final furlong, while the winner’s stablemate Concertista was a further five and a half lengths back in third.

Townend said, “I thought if he reproduced the run in Gowran it would make him competitive and any improvement would let him go and do what he’d done.

“I was confident enough leaving the back that bar something silly happened that I’d get through. He relaxed well today. He just got keen going into the back straight but is learning his job well and his jumping is good.

“I’d hope he can make the step up to Graded company. We’ve always liked him and if the ground was a bit better he’d handle it.”

BoyleSports, Betfair and Paddy Power all introduced Mt Leinster at 25/1 for the Supreme Novices Hurdle at Cheltenham.