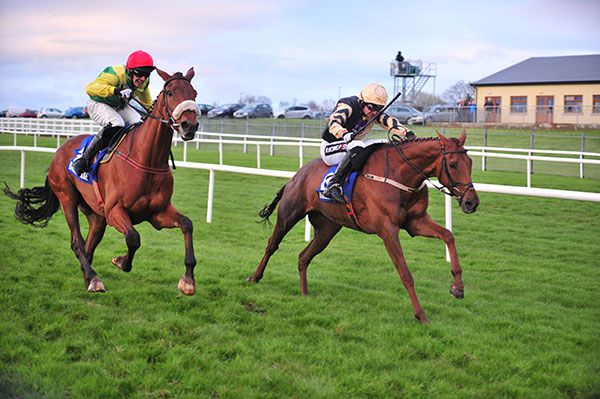 Vent D'automne stormed home in the closing stages to land the concluding bumper at Ballinrobe and give champion trainer Willie Mullins a quick double on the card.

The 9/4 shot had looked in trouble when coming off the bridle three furlongs from home in the two-mile one-furlong contest.

He stuck to his task well, however, under Patrick Mullins and chased down Castlebrook inside the final furlong to secure a half length victory.

The winner, owned by Graham & Andrea Wylie, had been second on his 'track' debut at Limerick last month.

"The track probably didn't really suit. We went slow and he was just in my hands," said Patrick Mullins.

"He's a real stayer. I'd say soft ground and a trip on a galloping track will see him at his best.

"It was a good race. I rode the second horse before and I think he's a right horse. I'd say that race could work out very well."

There was a sting in the tail for the winning rider as he was handed a three-day suspension for excessive frequency with his whip.

Eoin O'Brien, rider of the runner-up Castlebrook, was hit with a five-day ban.