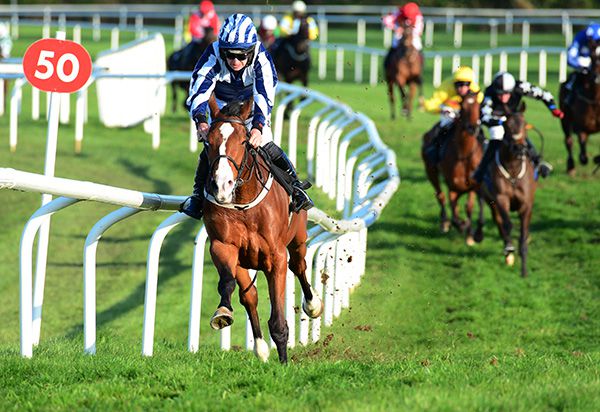 Trained by Mullins' father Willie Mullins, the son of Declaration Of War was the steady 7/4 favourite to win today's finale and in the end scored an easy and impressive 19 lengths win from Midnight It Is.

The Mullins-pair had won the half-hour earlier bumper with Never Feel Blue and following Kottayam's success, Mullins the younger stated “he doesn't show that at home; at home he is much more laid-back and keeps a lot for himself, I'd say.

“For a big horse he cornered like a motorbike and I have paint all over my boot! I couldn't believe how well he handled the track for such a big horse.

“He loves that good ground, has plenty of size and could probably jump a fence no problem in time but I'd like to think that I might get a winners bumper out of him after that.

“I was very surprised to win 19 lengths. He's a different horse on grass than he is at home.”

Jockey Mullins has seven rides against professional jockeys left in his arsenal for next week's Punchestown festival and, were bookmakers betting, would be long odds-on for a record 12th career Amateur Jockeys' title.