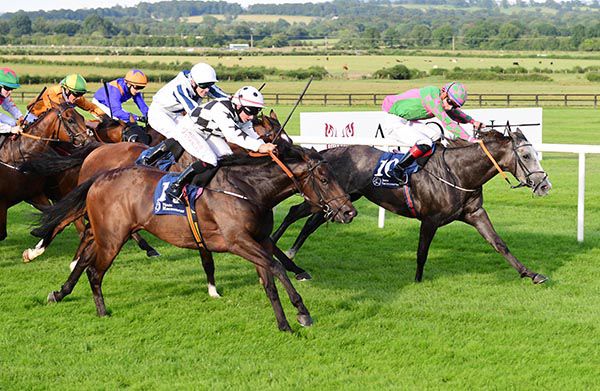 There were some hard luck stories for those horses who were held up off the pace in the second split of the 45-65 rated apprentice handicap but 14/1 chance Take My Hand, who was towards the front throughout, avoided any trouble in running and held on to score by a diminishing head.

Beleaguerment (14/1) came with a strong late challenge under Siobhan Rutledge down the outside but didn’t quite there as the winner kept going well to give Limerick teenager Wesley Joyce his fifth winner of the season.

The grey daughter of Tough As Nails, who was winning for the third time, went close at Galway last year and may bid to go one better next week.

Winning trainer Michael Mulvany said: “I thought she fired a warning shot the last day in Leopardstown over seven. We stepped her up to a mile here and she just stayed on.

“There is a race at Galway that she was second in last year but we were getting a little low in the handicap and I thought we mightn't get into it.

“He's going to give me 5 or 6lb now and that might just get us in. That's probably where she goes next week.

“She was just caught on the line there last year and it's been the plan to bring her back.

Geological bounces back to form for a 15th success

The remarkable Geological brought up his 15th career success when obliging in The Pravha Handicap at Down Royal.

Bader Ginsburg was easy to back in the finale at Down Royal but ran out a convincing winner for trainer Ado McGuinness.