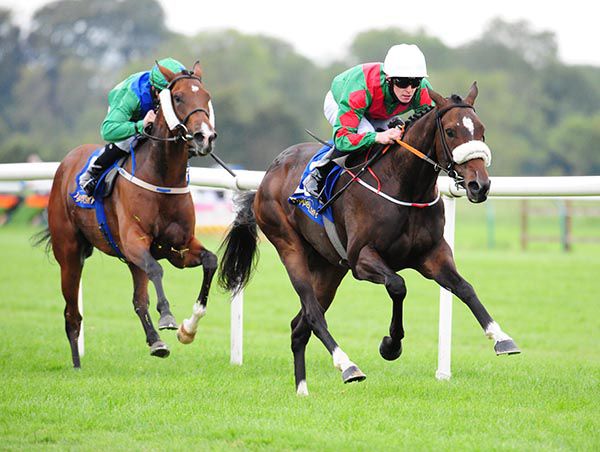 Luke McAteer sealed a 169/1 double in Tipperary when 33/1 shot Na Caith Tobac prevailed in the apprentice handicap over nine furlongs.

The Elzaam gelding was pushed along to get into contention with less than three furlongs to travel.

He was soon back on the bridle and led with over a quarter of a mile left. He was ridden a furlong and a half down and boxed on at the head of affairs.

Sweet Justice tried to challenge on the leader's inner in the final furlong, but Na Caith Tobac went on in the final 100 yards to win going away by two and a half lengths.

Trainer Paul Flynn said: "I was nearly going to pull him out due to the quick ground, but all the lads said it was safe so we took a punt.

"It was too short for him over six at Fairyhouse and Rory Cleary (jockey then) said 'what are you doing?' and to step him up in trip on softer ground. We got away with the ground today, but he could improve again on softer ground.

"The owner (Philip Carney) was going to punt him and I told him that today was the day if he was going to back him: it wasn't that we thought he was a world-beater, but it was the right race.

"Hopefully he will win a few more and he jumps hurdles great."

This was McAteer's sixth winner in September.

The Stewards enquired into an incident inside the 200 yard marker involving South Forest, ridden by Jack Cleary,unplaced and Stellify, ridden by S.M. Mooney, placed third, where it appeared that South Forest ran short of room, clipped a heel and stumbled. Evidence was heard from the riders concerned. Jack Cleary gave his evidence in the presence of James G. Coogan. Having viewed the recording of the race and considered the evidence, the Stewards were of the opinion that the incident was caused by S.M. Mooney riding carelessly, this being a breach of Rule 214. Having taken his good previous record into consideration, the Stewards suspended S.M. Mooney for one race day.

The Stewards requested a report from Paul W. Flynn, trainer, as to the apparent improvement in form of Na Caith Tobac (HOL), placed first, as compared with its recent form. The trainer reported that his charge was a raw improving type that had developed physically and returned today after a twelve week break. In his opinion the longer trip today was also a contributing factor to the improved performance. Having considered the evidence the Stewards noted the content of the report.