Next In Line delights connections with 2nd win in a week 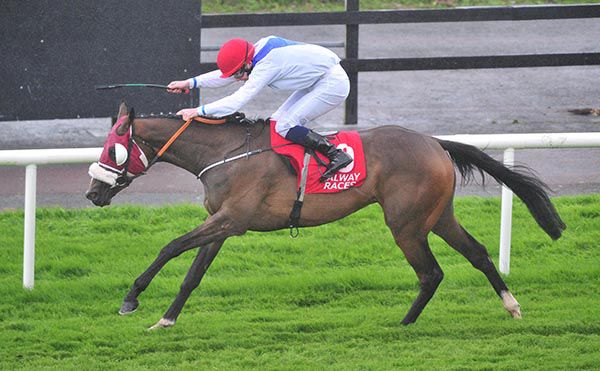 After her 16/1 success at Gowran seven days back Next In Line struck again at a double figure price, scoring at 12/1 in the It’s Not Rocket Science With MansionBet Handicap at Galway.

With blinkers on for the second time after previously not coming up to the mark at Sligo, the three-year-old was soon in front and showed a willing attitude to stay there.

Seven pound claimer Luke McAteer in the Formula Four Syndicate silks, asked for more in the straight and got a generous response from his mount.

“I stressed it to Luke to make her stamina count and I knew when she met the hill she’d keep going,” said winning trainer James Barrett, also on lead-up duty.

“There were seven furlong and mile horses in there but this one gets further.

“She’s after winning two in a week now so she deserves a little bit of a break.”