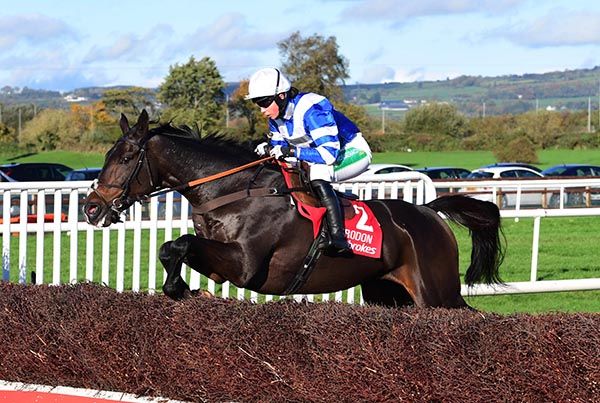 Paul Nicholls is ready to tackle Ireland's top chasers in their own back yard at Leopardstown next month, with Frodon, Clan Des Obeaux and Greaneteen being readied for the Dublin Racing Festival.

Frodon, winner of the Ladbrokes Champion Chase at Down Royal, and dual King George VI Chase hero Clan Des Obeaux are among 18 entries for the Paddy Power Irish Gold Cup at Leopardstown on Saturday, February 5.

Nicholls, who previously rode the winner of the race on Playschool in 1988 and then trained Neptune Collonges to win in 2009, is also set to run Queen Mother Champion Chase hopeful Greaneteen in the Ladbrokes Dublin Chase on the Sunday of the showpiece fixture.

Assistant trainer Harry Derham said: “That is the plan at the moment. Both Frodon and Greaneteen prefer a sounder surface, and racing out there the ground has looked good — so that is the plan.

“In the shape of Greaneteen and Frodon — and with Clan Des Obeaux, who is also entered in the race that Frodon is in — you have got obviously really smart horses, Grade One animals, and the conditions of those races in terms of the ground and the track will suit them well, so if you have got the appropriate horse, then it is wise to take them on.

“There is no point going over there with the wrong animal, so that’s why they are entered.”

Only three horses have managed such a feat — the British-trained Jodami (1993), Irish-trained Imperial Call (1996) and most recently in 2017 when Jessica Harrington’s Sizing John did the double.