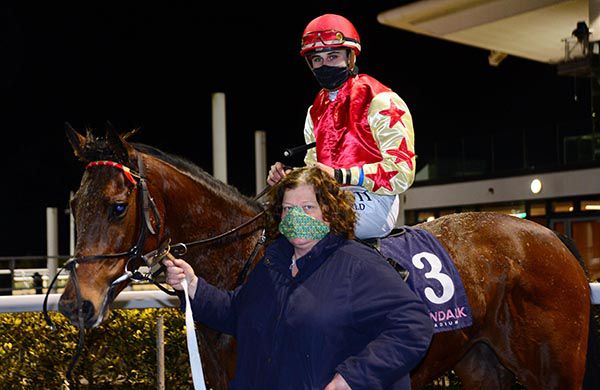 After five beaten market leaders in succession, including some real short-ones, Noirvento (5/4) provided some reprieve for favourite backers in the second split of the Crowne Plaza Hotel Leading Jockey & Trainer Championship Handicap.

A fourth career win and a first on the polytrack was achieved for Tracey Collins’ five-year-old daughter of Le Cadre Noir, through the waiting tactics employed by jockey Ronan Whelan.

He held her up in rear, and asking for more from two furlongs out Noirvento made progress on the outer.

Ridden and going second a furlong out, the Conyngham Lodge runner improved to lead inside the final furlong, staying on well to defeat Fit For Function by three parts of a length.

“She deserved that, she's a model of consistency,” said Collins.

“Her owners (Altar Ego Syndicate) are great, they have persevered with her and she's had a good season for them.

“Ronan gave her a lovely ride, coming from last to first. They went very hard early on and she finishes very well.

“I'd say six-and-a-half is probably her ideal trip. I'm delighted with her.”

J.M. Sheridan, rider of King's View trained by Patrick J. McKenna, reported to the Clerk of Scales that his mount felt wrong behind on leaving the starting stalls and was pulled up as a consequence.

R.P. Cleary, rider of Joupe trained by Peter Lawlor, reported to the Clerk of Scales that his mount received a slight check on the turn into the straight.

The Irish Horseracing Regulatory Board Veterinary Officer examined King's View, trained by Patrick J. McKenna, at the request of the Stewards and reported the animal to be tender behind post race. This animal pulled up soon after the start.