Not without a scare but Honeysuckle remains undefeated 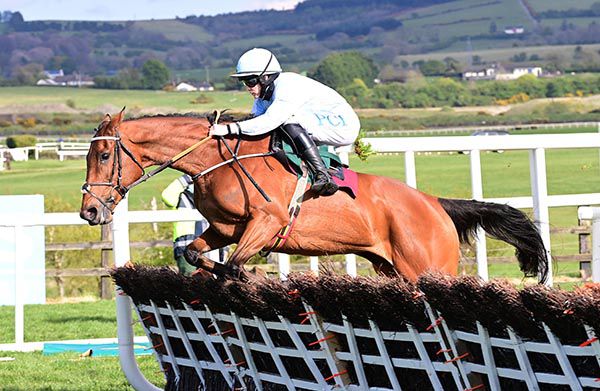 Honeysuckle capped an amazing campaign when taking her unbeaten record to 12 in the Paddy Power Champion Hurdle at Punchestown.

Henry de Bromhead’s remarkable mare followed up her victory at Cheltenham with another convincing display in the hands of Rachael Blackmore.

Asked to go and win the race after jumping the second-last flight, Honeysuckle soon put daylight between herself and her rivals.

Her supporters had a slight scare coming to the last when the 4-7 favourite steadied going into it, giving Sharjah a chance to catch her.

However, she pulled away again on the run-in to score by two and a quarter lengths. Epatante was 10 lengths away in third in a repeat of the positions in the Champion Hurdle at Cheltenham.

Honeysuckle was cut to 2-1 favourite from 11-4 to defend her Champion Hurdle crown at Cheltenham next spring with Paddy Power.

“It’s 100 per cent relief — I nearly threw it away at the last,” said Blackmore.

“She was feeling the season a little bit I think, but she’s just phenomenal.

“I wasn’t as comfortable throughout the race on her today, but still she just delivers.

“Real stars get jockeys out of trouble. I did sleep last night — sleeping is never a bother.”

Blackmore and De Bromhead have endured a disappointing week by their own high standards, with Honeysuckle a first success at this year’s Festival.

Cheltenham Gold Cup winner Minella Indo had to miss his intended run on Wednesday due to a minor issue while star novice hurdler Bob Olinger was ruled out of his Punchestown engagement at a late stage due to coughing.

De Bromhead said: “We weren’t having an amazing week, but she always gets us out of trouble. She’s amazing. I’m just delighted for Kenny (Alexander, owner), Peter (Molony) and everyone involved.

“She’s like a lot of those really good horses, she has such a will to win and Rachael is so good on her.

“She’s done that before at the last, but thankfully Rachael had it all under control. It’s been an amazing season and that’s a great way to finish it off.”

Molony, who is Alexander’s racing manager, admitted there is a “temptation” to switch to chasing with Honeysuckle, who was a point to point winner before embarking on her career under rules.

He said: “We have to sit down and have a chat about it (plans for next season).

“There is a temptation there (to go over fences). She’s a wonderful jumper — she looks like a chasing mare. The temptation is there — how exciting would it be, but we’ll have a chat.

“I know she does (jump fences), I’ve seen her do it (schooling on Sunday mornings). We’ll see."