Notebook takes step up in class in stride 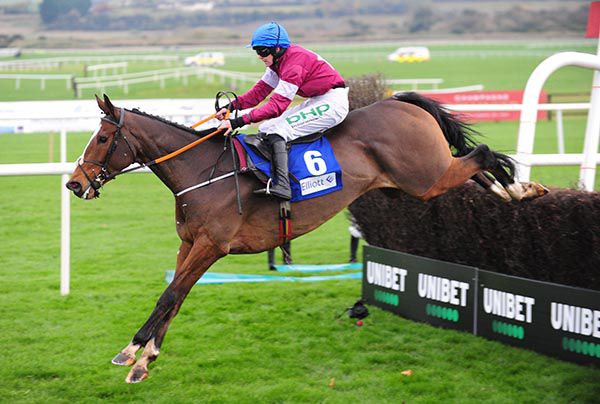 Notebook surged clear in the closing stages to run out an impressive winner of the Elliott Group Craddockstown Novice Chase at Punchestown.

Henry de Bromhead saddled two leading fancies in the two-mile Grade 2 contest and it was the Gigginstown gelding who proved the class act.

Rachael Blackmore was in the saddle, aboard the German-bred, and he raced prominently throughout.

The 11/4 shot moved through to dispute with 5/2 favourite Eclair De Beaufeu four from home and was driven into a narrow lead two out.

Notebook asserted before the final fence and big jump at the last sealed matters. He galloped on strongly on the run-in to post a five-length winning margin.

Stable-mate Moon Over Germany came through to chase him home without ever looking a danger.

The winner was following up on his chase debut success over course and distance last month.

“He looked impressive here the last day and it’s nice to see him back it up. His jumping was great — he seems to love it. I was a little concerned how he would jump out of that ground but he was electric.

“He’s really exciting and the fences make a big difference to him. He jumps quick and I think we should use that over two miles for the moment.

“Gigginstown have plenty of horses and we’ll see what they would like to do but I’d love to stay at two.”

Blackmore added:- “He's an absolute joy to ride. He has loads of scope, he got real tight to one down the back but he was real quick out over it. He can do everything in that sense.

“He had loads left and he's not too bad. His jumping really helps him and he's definitely going places, I'd say.”

Betfair introduced the winner at 25/1 for the Arkle.