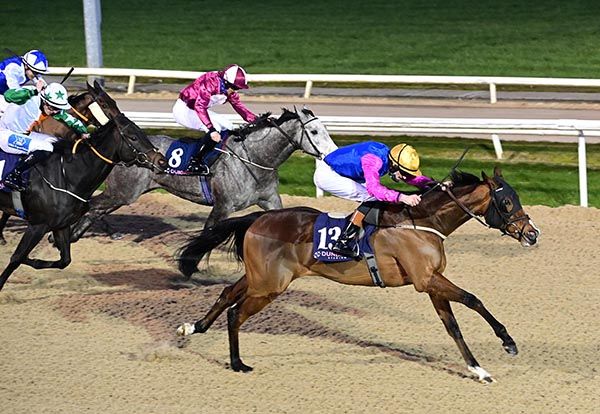 Donagh O'Connor today moved level with Chris Hayes at the head of Dundalk's Winter Series Championship when steering a first winner for trainer Dermot Weld on Lyra Belacqua in the Follow Us On Twitter @DundalkStadium Maiden.

Having her tenth start, the daughter of Kingman scored readily from Is That So and afterwards O'Connor said “that's my first winner for Mr Weld, I've had a few second places, and it's nice to get a winner for him.

“Everything was very straight-forward - Mr Weld put the blinkers on, she's not ungenuine, she just needed them to sharpen up a little bit.

“He didn't tie me down to instructions, he gave me a free rein. I was trying to hold on to her but at the same time we went quite a steady pace and they quickened it up halfway around the bend so it suited to be up in the front of the wagon.

“She quickened up well and did it well in the end.”

It was O'Connor's ninth success of the Winter Series, the same number achieved thus far by Chris Hayes, with the pair two clear of third-placed Mikey Sheehy.