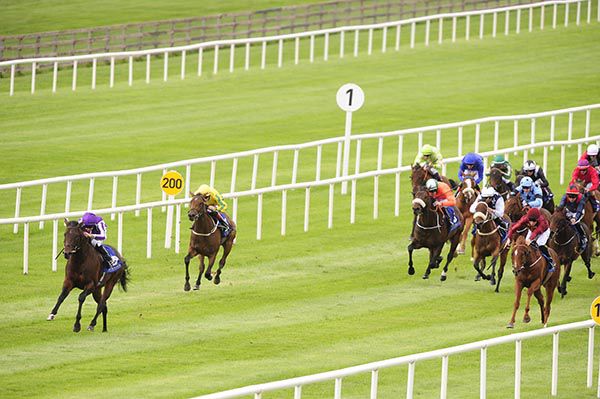 Ten Sovereigns is back out again quickly in the John Sisk & Son Round Tower Stakes at the Curragh on Saturday.

The son of No Nay Never holds entries in all the major end-of-season juvenile events but it is Newmarket’s Middle Park Stakes that the Ballydoyle handler is eyeing up.

O’Brien said: “He seems to be fine. Obviously he only ran last week but we’re happy with him.

“We’re looking at the Middle Park and we just felt that he needed another run before we went there. That was the reason for running.

“He hasn’t done much since last week but he seems to be in good form.”

Mia Mento looked potentially smart when making a winning debut at Leopardstown, and has subsequently been bought by Phoenix Thoroughbred Limited, who have left her with Tom Mullins.

“I wasn’t expecting Aidan to run the favourite, to be honest, but six furlongs is right up her alley,” said Mullins.

“She’s in great form and she’s gone long enough without a run, so I wanted to get her out. I was also keen to get some experience on the Curragh into her.

“This race comes at the right time. It means she’s taking on colts but I’ve been very happy with her at home.

“It’s great that her new owners left her with me and I hope she does very well for them. Who knows what it might lead to.”

Pat Prendergast, who won the Debutante Stakes with Skitter Scatter last week, runs Could Be King, who ran on the same card, finishing fourth in the Futurity Stakes to O’Brien-trained Derby favourite Anthony Van Dyck.

Mick Channon saddles Jungle Inthebungle who won a decent contest at Beverley in June but has been found wanting upped in class.

“I think he’s coming back to form. We just lost him a little bit, but the ground should be perfect for him,” said Channon.