O'Brien doubles up with Articulum 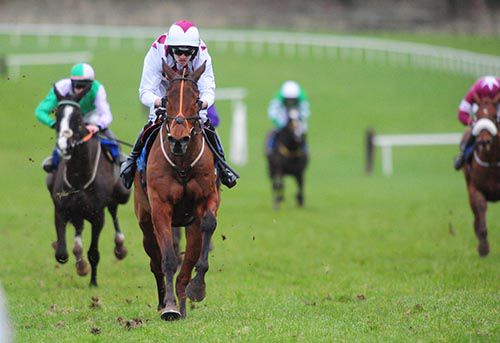 The Carrigtwohill trainer was on the mark earlier on the card with Hes Our Vinnie (7/1) in the three-mile handicap hurdle, and was completing a good week as Consharon Boy also won for the Co. Cork yard at Gowran Park last Saturday.

Pat Collins’ mount headed the front-running Mighty Stowaway entering the straight, and the 11/8 favourite soon put the race to bed by quickening clear over a furlong out.

The Definite Article gelding, runner-up to Cheltenham Festival entry New To This Town at Thurles before winning at Naas in January, stayed on strongly to score by five lengths.

Mighty Stowaway kept on one paced in second, with Polymath a further five and a half lengths back in third.

Augustin held every chance over two furlongs out but could only manage fourth.

O'Brien said, "That was unreal and I'm absolutely thrilled. I'd say he's the best horse I've trained. I haven't trained many good horses but he seems to have everything.

"I think he could be serious and the real deal. He always showed us that at home.

"We'll see what happens but fingers crossed he'll run in the Punchestown Champion Bumper next. He's 17 hands and Pat (Collins) said the whole way up the straight he was saying 'whoa'."

The winner is owned by English based trio Martin McDonagh, Paul Murphy and Mike Nixon.