O'Brien doubles up with Busselton 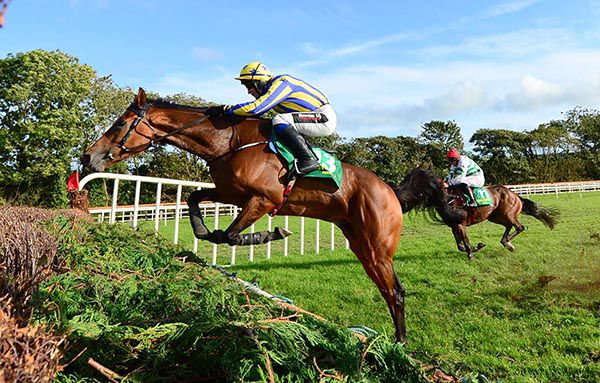 Busselton (7/2) was a wide margin winner of the Brandon Hotel Beginners Chase in which the two fences in the home straight were omitted due to the low-lying sun.

The Flat-bred by Mastercraftsman was always prominent and went on from the 6/5 favourite The Bosses Oscar at the final fence that was jumped in this race which was the usual third last.

On the long run-in the winner stayed on strongly under JJ Slevin to draw thirteen lengths clear of the market leader.

A smart hurdler who was third to subsequent Triumph Hurdle winner Quilixios in a Grade One at Leopardstown in February, Busselton had finished runner-up in his first two races over fences.

He was completing a quick double for winning trainer Joseph O’Brien after Assemble in the big race half an hour earlier, and assistant trainer Brendan Powell remarked: “He’s only a four-year-old but he’s a tough hardy horse. He was one of the favourites for the Fred Winter at Cheltenham this year and had the ability.

“He jumps, he stays and it probably would have helped him if there were two more fences. Even though he made the running he can idle in front.

“He’s kept galloping and seems to go on any ground. He gets the four-year-old allowance as well which makes a difference.”

Drummer Boy and Gainford in hot water with Navan stewards

Gino Drummer Boy's 10th placed run in the 1.05 race today caught the attention of the Proudstown Park stewards, and both the horse and his jockey, Jordan Gainford, were sanctioned under Rule 212 A (ii) and Rule 212C(d). See below.

Shishkin got up in the final few strides to deny Energumene in a pulsating renewal of the SBK Clarence House Chase at Ascot.

Handicap 'good thing' Routine Excellence (5/6) delivered in the 22-runner Gormanlough Handicap Chase, but not before giving his connections and backers a mighty scare at Navan.