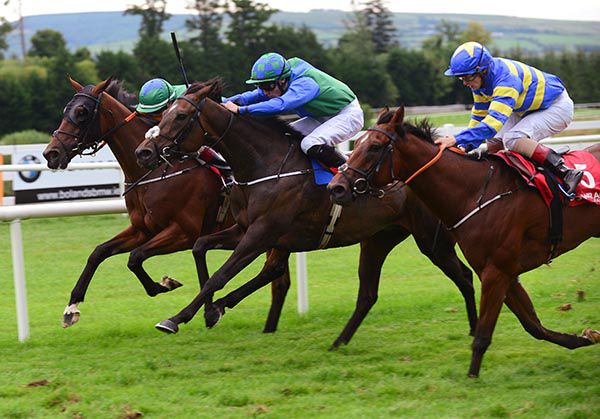 Pedisnap completed a double for Joseph O'Brien (earlier successful with Facethepuckout), as she got up close home to take the first divide of the Gowran Park Apprentice Handicap.

Already twice successful this season, the daughter of Footstepsinthesand was last seen finishing ninth of twenty at Leopardstown last Thursday.

Available at 8/1 in early shows, the bay victor came in for plenty of market support, opening on-course at 4s, before going off the 11/4 second favourite.

Settled in mid-division, she was pushed along and closed on the front-running Lizard Point from the two furlong pole.

She was ridden in third from a furlong out, and kept on best from there, getting up to prevail by a neck.

The aforementioned Lizard Point (10s to 8s on-course) had to settle for second under Ben Coen for Pat Flynn, while the 5/2 favourite Royal Admiral, who proved easy to back on course, was another neck back in third.

The front three pulled three and a half lengths clear of Lady De Vesci (14/1) in fourth.

"Shane and Donnacha have rode her the last twice and both said to try her going a bit further," said O'Brien.

"That was her first time over a mile-and-a-quarter. It was nice to see her get the trip well and that's probably where the little bit of improvement came from again. She's gone up a lot in the handicap.

"Shane gave her a great ride today, he was strong on her and didn't panic on her.

"I'm delighted for the owner John (Farrell) as she's after winning three this year.

"She's a nice hardy filly. If every horse won three races in the year you'd be happy."