Off Your Rocco back to his best 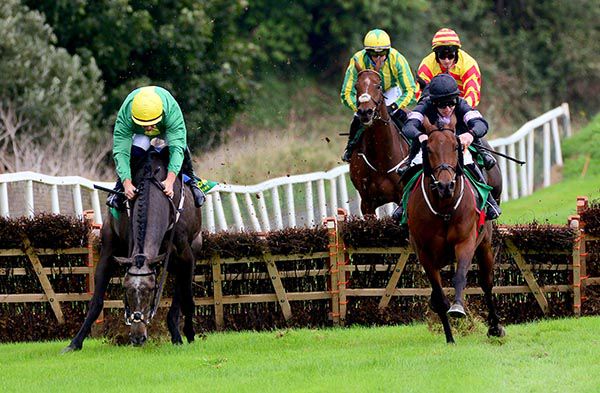 After a poor run at Galway, Off Your Rocco (4/1) was very much back to form in the Seamus Mulvaney Bookmaker Novice Hurdle.

A bumper and maiden hurdle winner in his first two races, the 5-year-old had finished 49 lengths last of seven behind Annie G in a Listed novice event at Ballybrit when last seen.

On this occasion the Shirocco gelding, wearing first-time cheekpieces, chased the front-running Hammersmith before coming through to lead travelling well before the second last.

The 4/6 favourite Farout, who had been less than fluent, was almost upsides when blundering and losing all chance at that flight after which the winner cruised clear under Jack Kennedy to beat the market leader by eleven lengths.

Winning trainer Gordon Elliott said: “Jack was very wise in Galway as he made a mistake at the first and he looked after him and gave him a good education. It paid dividends today.

“I’d say he could step up to two and a half miles as he looked like he was going as hard as he could early. I thought he was gutsy and stayed galloping.

“It’s great for the (Pioneer Racing) syndicate as they are all down here today enjoying the atmosphere and having a bit of fun. They have had plenty of success this year.”