One Voice makes herself heard at Leopardstown 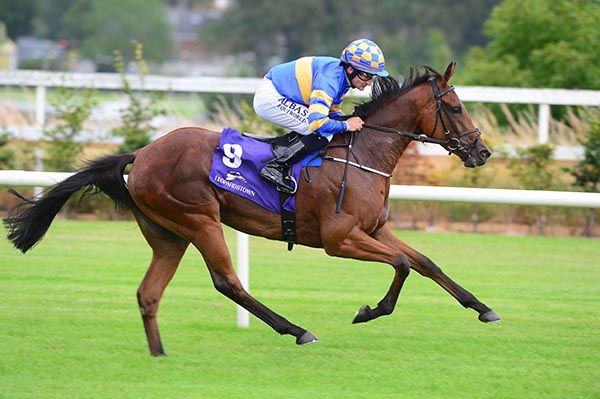 One Voice was a facile all-the-way winner of the opening 2-y-o Fillies Median Auction Maiden at Leopardstown.

Building on her debut runner-up finish over course and distance in June, the 2/1 favourite accounted for the running-on Auxilia (3/1), with Deise Delight a further three and three quarter lengths back in third place.

Jockey Nathan Crosse was unseated from Burren Orchid in the early stages. It was later reported that he was fully conscious and stable leaving the racecourse, and had been taken to St. Vincent’s Hospital for observation and precautionary x-rays.

The winning trainer Jessica Harrington said afterwards: “She was good. We thought she had improved a bit from her first run.

“She did a bit of work the other morning and we thought she had improved.

“He was always kind of in control. He had a nice draw and just kept it simple.

"We'll head on now from there. I'm not sure quite where we are going but we will find somewhere for her. It's nice to get her to win.”

Well-backed Ebeneezer Perry does the business

Displaced from favouritism by the well-backed runner-up, Celtic Times made all in the Irish Stallion Farms EBF 2-y-o Maiden.

Coronation Cup an option for Arc runner-up In Swoop

In Swoop has a couple of options for his next race after making a winning return to Group-level competition when taking the Prix d’Hedouville at ParisLongchamp on Thursday.

The going description at Leopardstown has been changed from good, good to firm in places and is now good to yielding following some heavy showers this morning.