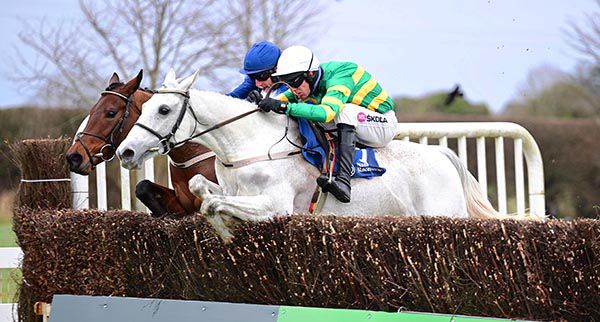 J.P. McManus' Elimay enhanced her Cheltenham Mares' Chase prospects with a comfortable win in the BBA Ireland Ltd Opera Hat Chase at Naas today, as she provided a fourth consecutive success in the Listed race for her trainer Willie Mullins.

Elimay chased leaders Shattered Love and Yukon Lil and while she hit a flat-spot at halfway, indeed at one point shaking her head having met some kickback, she quickened into contention entering the home straight.

Paddy Power later cut Elimay to 3/1 from 7/2 for the inaugural running of the Mares' Chase at Cheltenham.

Mullins has won five of the last six renewals of today's race and reported “that was a nice race to win and shows up Allaho’s (stablemate) form. It’s great to win the Opera Hat in honour of Valerie Cooper’s good mare (Opera Hat) and hopefully this mare might some day be as good as her.

“Mark was happy to let the pace materialise up front and the ground is quite boggy down the back. The further the race went the better she was going and Mark was very pleased how she finished.

“That’s a nice stepping stone towards Cheltenham. I’ll have a word with connections but I would imagine that we will send us towards the Mares Chase.”