Package to the Rescue for Mullins & McGuinness 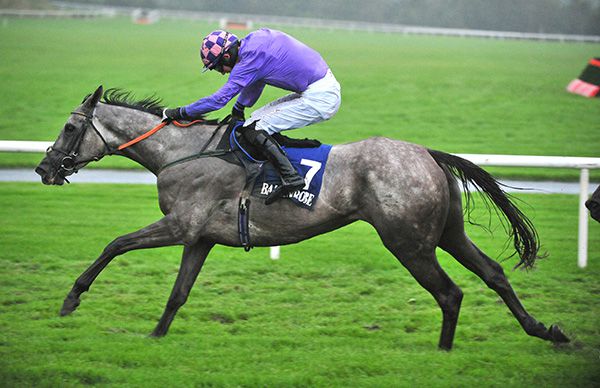 Rescue Package came out on top in the last at Ballinrobe this evening, the Irish Stallion Farms EBF Fillies Flat Race.

A good fourth of twelve on debut at Killarney in July, the Tony Mullins trained grey was sent off at 7/1.

Settled behind the leaders by Luke McGuinness, she took closer order from the four furlong pole and was soon squeezed for room between rivals.

Ridden and switched to the inner entering the straight, the daughter of Montmartre got to the front with over a furlong to race and she kept on well from there to prevail by two lengths.

Newcomer Fairyhill Run (10/1) ran a fine race to finish second under Declan Lavery for John Ryan, while the Willie Mullins trained Survetta (4/7f) was a neck back in third.

"I wasn't worried about the change of ground for her - I knew that wasn't going to be an interference, more than saying it would be a help," said Mullins.

"I hope she's a high class filly. She hasn't matured yet anything like what I believe she's going to do.

"We'll have to sit back now and have a long think - I would imagine she'll have a little break but we'd be thinking very seriously with this one."