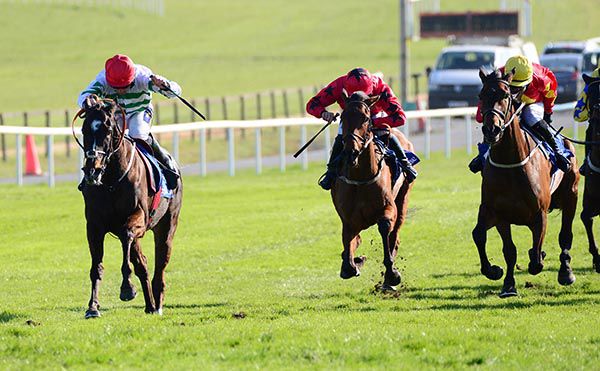 In the race to be champion amateur Jamie Codd levelled the score at 42 winners apiece with Patrick Mullins, on the heavily backed favourite Party Central (6/4) in the Listed Irish Stallion Farms EBF Total Enjoyment Mares Flat Race at Fairyhouse.

The winners had to engineer a passage through for themselves early in the straight and Party Central soon moved up travelling smoothly.

Mollys Glory ran an excellent race in second but the victorious Yeats mare galloped on well when given the office to prevail by a length and three parts.

“She's lovely. She was entitled to do that after Leopardstown and she did it nicely,” said winning trainer Denise ‘Sneezy’ Foster.

“Jamie's head was on the block as he had her from the word go, he won the bumper on her for the Motherways. He was glad that he put the right mare in.

“She's absolutely lovely and the world is her oyster. There is a Grade 3 for her in Punchestown and she'll make a lovely novice hurdler next year.

The Stewards enquired into an incident on the entrance to the straight involving It'sallabouteve, ridden by Mr W.T. Cronin, unplaced, Party Central, ridden by Mr J.J. Codd, placed first and Condesa, ridden by Mr B.G. Crawford, placed third, where it appeared that interference may have occurred when It'sallabouteve had the other two runners in a pocket before Condesa found a gap to get out.

Having viewed the recording of the race and considered the evidence, the Stewards accepted the riders' explanations and took no further action.

The Irish Horseracing Regulatory Board Veterinary Officer examined Brooklynn Glory, trained by W.P. Mullins, at the request of the Stewards and reported the animal to be post race normal.