Petit Mouchoir moves back to Elliott after sale 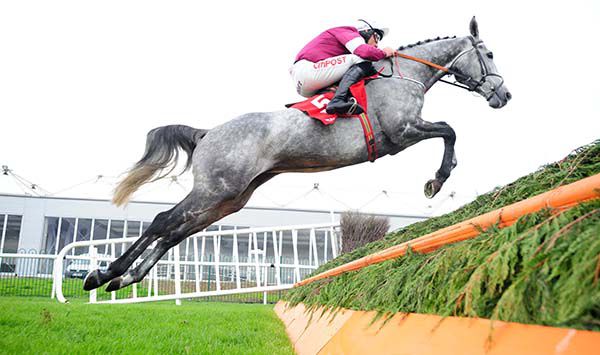 Dual Grade One-winning hurdler Petit Mouchoir will move to Gordon Elliott’s yard after being sold as part of the annual Gigginstown House Stud dispersal at the Goffs UK September Sale.

Ryanair boss Michael O’Leary, who announced last year that he was scaling back his racing operations, sent a large team of horses to be sold without reserve at Doncaster on Tuesday.

The undoubted star of the squad was the nine-year-old Petit Mouchoir — the winner of five races since joining Henry de Bromhead, including the 2017 Irish Champion Hurdle at Leopardstown.

While winless in almost three years, the grey has been running well in defeat in 2020, finishing placed behind then stablemate Honeysuckle in the Irish Champion Hurdle in February, fifth in the Champion Hurdle at Cheltenham and third in the Galway Hurdle last time out.

Petit Mouchoir will return to Ireland after being knocked down to bloodstock agent Mouse O’Ryan and Elliott for £70,000.

“He’s been bought for an existing owner in the yard,” said O’Ryan.

“We (Elliott) actually had him as a four-year-old, when he won the Land Rover Bumper at Punchestown.

“He’s a star and as long as he stays safe and sound, he’ll be able to go for all those big races on a Sunday in Ireland.

“He’ll aimed at the Morgiana Hurdle at Punchestown in November.”

Reflecting on the day as a whole, O’Ryan added: “I thought it was a very good trade. A lot of people have been giving out, but I think the trade has been brilliant, considering we’re in the middle of a pandemic. All credit to Doncaster for getting it on.”

Another Gigginstown-owned veteran to go under the hammer was De Bromhead’s 11-year-old Sub Lieutenant, who was bought by David Phelan on behalf of an unnamed client for £50,000.

Phelan said: “I’ve bought him for a friend with a view to him running in the Grand Sefton at Aintree and possibly ending up in the Grand National next year.

“He’s been second over the National fences in the Topham and ran a good race last time to finish second in the Galway Blazers.

“Horses like him don’t come along very often — you can sometimes pay £50,000 for a store horse who’ll never make the track.”

An even bigger team of around 50 horses went through the ring for three-time Grand National-winning owner Trevor Hemmings.

The 85-year-old has been one of National Hunt racing’s most successful owners during a 36-year spell in the sport, but confirmed last month he was significantly reducing the number of horses he has in training, citing the impact of coronavirus on his personal life and business interests as a major factor.

The top lot from the Gleadhill House Stud dispersal was Stoney Mountain, who won six races in the Hemmings silks for trainer Henry Daly, including the Grade Three Stayers’ Handicap Hurdle at Haydock last November.