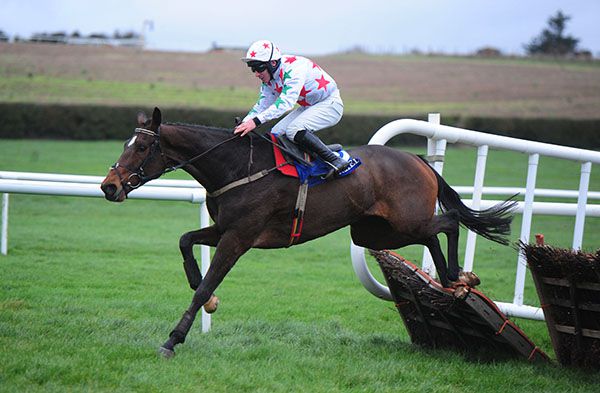 The Robert Tyner-trained Carrigmoorna Pine proved a class apart in the opening maiden hurdle at Clonmel as he cantered to success.

The former point-to-point winner had been well beaten on two previous efforts over timber but dropped in grade in a race confined to horses that hadn't reached the first three in three runs he found things a lot easier.

Phillip Enright settled behind the leaders on the 10/3 shot before allowing him to cruise into the lead at the second last.

The Oscar gelding scooted clear before the final flight and despite a slight error there didn't have to come off the bridle to secure a seven-and-a-half length success over Stormy Judge.

Millen To One, sent off the 6/5 favourite, was two-and-a-quarter lengths back in third.

The trainer's wife Mary Tyner said afterwards:- "It was a suitable race for him and hopefully we'll find something for him at Christmas for him.

"We had no plan really and wanted to see what happened today. He will now probably go chasing as he is a big horse but we'll let him get over today first.

"His owners are from Dungarvan and the win keeps everyone happy."