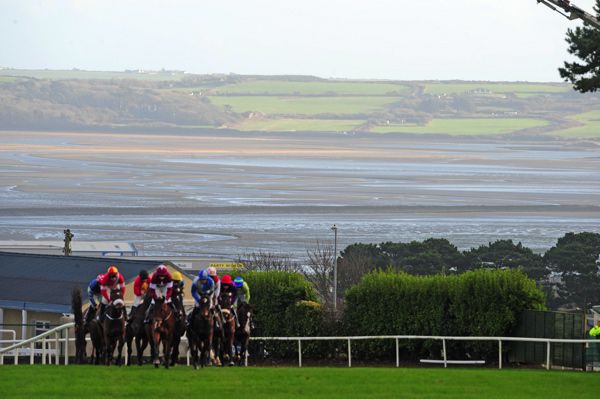 Final day of the August Festival at Tramore.
© Photo Healy Racing
From Eden and October Revolution are just two to concentrate on in the ultra-competitive McCarthys Irish Bar Handicap Steeplechase at Tramore on Sunday.

Trained by David McGrath, October Revolution is an 11-year-old with little mileage on the clock and reappeared from almost a year off to win well at Roscommon last month.

There are a plethora of dangers, though, including Gordon Elliott’s top-weight From Eden who is running consistently without getting his head in front.

In-form Darragh O’Keefe gets the leg-up on Downpatrick winner Demi Plie for the first time and the pair have to go on the shortlist.

Westmead ran a stormer at Killarney when pipped by a neck at 66-1. If building on that, he can make his presence felt in the Comeragh Veterinary Maiden Hurdle.

Blackhillsofdakota was highly tried when finishing down the field in a Grade Two bumper at Aintree in April, but has to be of interest on jumping debut in the Tramore Amusement & Leisure Park Maiden Hurdle.

The four-year-old gelding landed a Listed bumper in Limerick on his penultimate start.

Blackhillsofdakota’s jockey JJ Slevin has another good chance with Our Roxane in the Frank Gillane Handicap Hurdle. An improved display at Limerick saw her beaten by half a length.

First-time blinkers are tried on Darling Miss who is bidding to snap a row of runner-up finishes in the Europcar Mares Beginners Steeplechase.

Linger attempts to land a rare treble when he lines up for the Heinz Pollmeier Memorial Handicap Steeplechase.

Skyace could get her turn in the Irish Stallion Farms EBF Mares Flat Race after being placed in her first couple of mares’ bumpers.