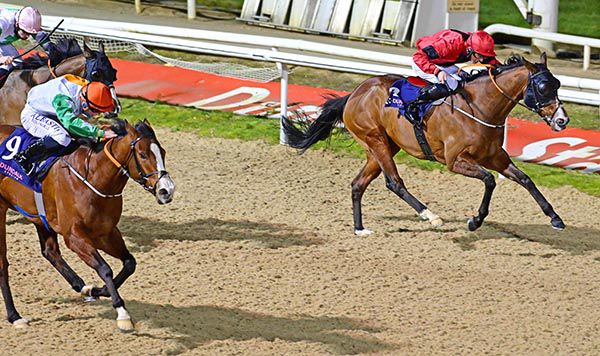 With his welter burden of ten stone six Alfredo Arcano (9/2 favourite) ran well on a strong pace for third, but stable companion Eglish was the one to give War Hero most to do.

The other Hayestown House participant, Never Back Down, finished towards the rear.

“It worked out well. He's difficult in the stalls starting off,” commented McGuinness.

“He just loves this place and he's so versatile. He's been a great fun horse for Mark Devlin, who is a good patron of mine and has been with me a long time.

“It's great that the other horse was second as well.

“I'm going to dedicate this win to my brother (Laurence) who I buried last week. He was very fond of the racing.”

The Stewards interviewed C.J. MacRedmond, rider of War Hero, concerning his use of the whip in the closing stages of this race. Evidence was heard from the rider concerned. Having viewed a recording of the race and considered the evidence the Stewards were satisfied that C. J. MacRedmond was in breach of Regulation 10.3.g, excessive frequency. Having considered C. J. MacRedmond's record in this regard the Stewards cautioned him on this occasion.

Dynamite delivers at 'sevens on'

With Wonder Laish (coughing) out, French Dynamite justified odds of 1/7 in the three runner Seamus Meade Hurdle at Leopardstown.

Dream weekend for Casey as O'Regan wins another for Dublin handler

Palace Rock won the opener at Navan yesterday for Francis Casey and Denis O’Regan and they repeated the feat in race one at Leopardstown this afternoon through Kalanisi gelding Max Flamingo.

Mishriff to go up in trip for the Dubai Sheema Classic

Mishriff is to move up to a mile and a half for the first time in the Dubai Sheema Classic at Meydan this month.

Beau Bay is set to take another step up in trip and go for the Fulke Walwyn Kim Muir Handicap Chase at Cheltenham.