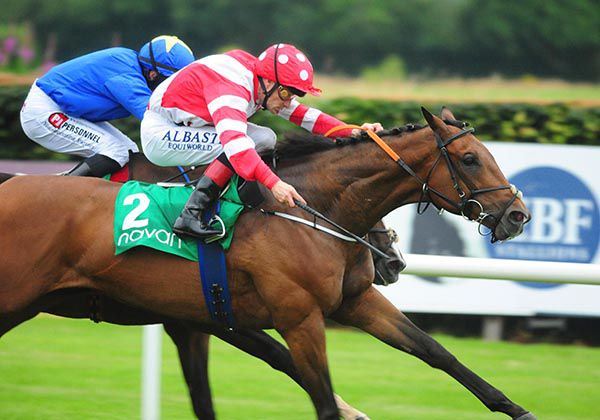 Political Policy
© Photo Healy Racing
The Drogheda Traders Plate is the most valuable contest on a seven-race card at Bellewstown on Wednesday evening.

A field of 10 runners have been declared for a 25,000 euro contest confined to qualified riders and perhaps the two to concentrate on are Gavin Cromwell’s Political Policy and Minnie Dahill from Ted Walsh’s yard.

Political Policy ran his best race on turf for a while when beaten just three-quarters of a length into second place at Limerick last month and another bold bid is likely in the hands of Conor Orr.

The four-year-old was runner-up in a Roscommon maiden in the spring and reverts to the Flat after finishing third over hurdles at Downpatrick.

Willie McCreery’s Amaira, the Patrick Prendergast-trained Cedars Of Lebanon, Jessica Harrington’s Riding The Storm and Syrena, trained by Joseph O’Brien, have all shown enough to suggest they are capable of winning a race of this nature.

It will be disappointing if Michael O’Callaghan’s Captain Vancouver is unable to break his duck in the Irish Stallion Farms EBF Median Auction Maiden.

The gelded three-year-old has been placed on four of his five starts to date and this looks a gilt-edged opportunity.

The nine-year-old has enjoyed a break since finishing sixth at Lingfield on Good Friday and while he is better known for his exploits on the all-weather, he is 10lb lower on the grass as a result and should give a good account of himself.

Iron Blue won as he liked at Gowran Park 10 days ago and could well follow up in the McCabes Mitsubishi Handicap, with the 7lb claim of Dylan Hogan offsetting a good chunk of his 12lb rise in the weights.