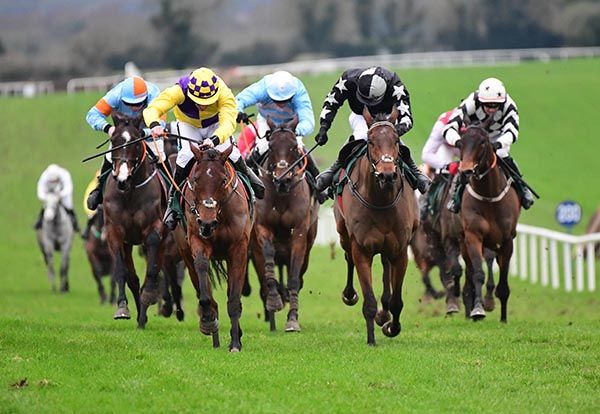 For owners the McCauleys, trainer Paul Nolan, and jockey Barry O’Neill (4-day careless riding ban), the Wexford runner overcame a far from clear passage from over two furlongs out to ultimately account for Don Chalant and Fiston De Becon by a length and three quarters and a length and a quarter.

“Barry said normally good horses get you out of trouble. The horse he was tracking didn't stop and then he was locked in a little bit and he said a couple of doors closed,” said Nolan.

“He said he's a good horse to get him out of trouble and he put it to bed in 100 yards.

“He's built on his first run, I hope. He didn't stop in Leopardstown, he was just beaten by a very good horse on the day and they were miles clear of the third.

“Hopefully he seems to be decent. He wouldn't show you a savage amount at home but when he went away to gallop on grass he improved every time he went away.

“Talking to lads that have Saddler Makers they say they are that way, show very little at home but are different when they get to the track.

“This fella is a very relaxed, very easy individual, nothing bothers him. Hopefully he stays in one piece.

“He's a well made sort of horse and he was well bought by James and Gerry Hogan, from Denis Murphy who recommended him to us.

“We'll have a talk now with the owners, he'll get an entry at Cheltenham and we'll see where we go from there.”

Mr J.J. Codd, rider of Nonbinding trained by Gordon Elliott, reported to the Clerk of the Scales that his mount gave a slight whinny going to the finish.

The Stewards enquired into an incident about one furlong from the finish involving Joyeux Machin (FR), ridden by Mr B. O'Neill and Tag Man, ridden by Mr D. Roche, where it appeared that Joyeux Machin (Fr) caused interference to Tag Man when making a manoeuvre. Evidence was heard from the riders concerned. In his evidence Mr D. Roche stated that he was going for a gap when Joyeux Machin (Fr) came across his mount despite his warning shout. Mr B. O'Neill stated that a gap opened and both horses went for it but his own mount was travelling the better and got there. Having viewed the recording of the race and considered the evidence, the Stewards were of the opinion that the incident was caused by Mr B. O'Neill riding carelessly, this being a breach of Rule 214. Having taken his previous record into consideration, the Stewards suspended Mr B. O'Neill for four racedays.