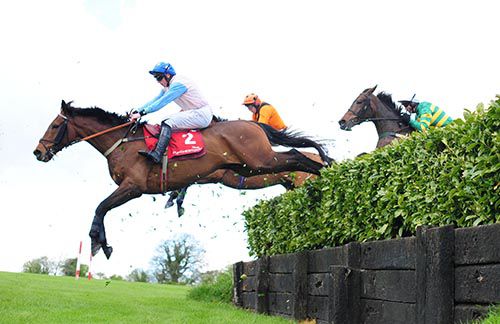 Trainer Peter Maher has announced that Punchestown Festival regular Enniskillen has been retired.

The 16-year-old gelded son of Witness Box has been a standing dish at Punchestown for the last decade, racing 38 times at the track including a remarkable 17 times at the Festival.

Enniskillen's year was always planned around the Festival and he made it to ten consecutively. He was also a regular at the Kildare Hunt point-to-point meeting picking up 3 Hunt races in a row. He graced other tracks throughout his career but none set him alight the way his home track 10 kilometres from his stable door did.

Trainer Peter Maher said on his retirement: “He has been part of the furniture and a much loved member of the yard since arriving at our gates 13 years ago. He might not have been the best horse but he wore his heart on his sleeve and always gave you value for money! It's a shame he didn't get his final run in front of a packed house in Punchestown last week because he had a great local following. He’s home safe and well after his 17th Festival run and he still looks a picture, as always he even picked up a bit of prize money but at 16 it’s time to drop the curtain on the Enniskillen stage.”

Owner Albert Weld said: “It's a sad day for us but were delighted he has retired in one piece and will now enjoy a long and happy retirement after years of consistent performances, giving us so many thrills along the way, Enniskillen is a credit to Peter and all the team caring for him to have enjoyed such longevity throughout his career with them.”

Enniskillen will spend his retirement in the care of Kirsty McCann.