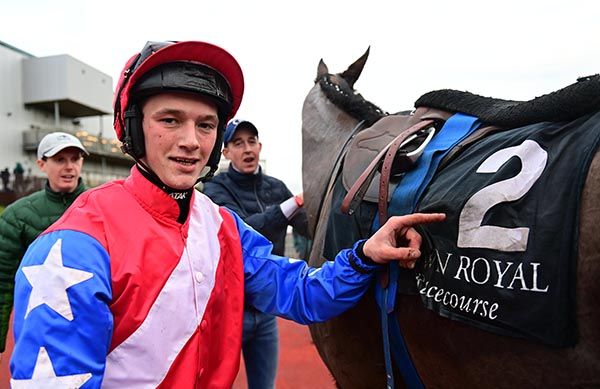 Angels Dawn got on top close home to prevail in the three-mile handicap chase after another good finish at Down Royal this afternoon.

Promising 7lb claimer Cian Quirke recorded a double on the card as he conjured a late charge from the San Curling-trained mare.

The daughter of Yeats came to dispute two from home but Ballykeel had a narrow advantage jumping the last.

Angels Dawn dug deep on the run-in, however, getting on top close home to record a half length success at odds of 5/2.

Quirke said: "I've a lot of people to thank for it now, I suppose I will have to start with the Slatterys as they have been unbelievable to me this year. I'm with them the last five years and they have taught me everything I know. I can't thank them enough for it all.

"I had a spell with Sam and learned a lot there too. He was good to let me ride the mare today.

"I was down the inside but, as the race panned out, I got squashed in there. She was jumping and travelling and jumping too well as she jumped into the back of horses a couple of times. It might not have been any harm because I might have had to commit a bit sooner.

"I got a flier at the third-last and jumped into a horse and it probably gave her a bit more of a chance to take a step back and come around them. She galloped the whole way to the line and I'm pretty sure they will have plenty of fun with her.

"I missed the second-last which wasn't a help but I was always plenty confident going to it (last) that I had plenty of horse left, she only gets going the further you go.

"The ground being a bit quicker today than everyone expected was a help to her with top weight. She handled it no problem and she likes it softer too. We have options for her going forward.

"Yes, unbelievable (start to the year) - if you told me this a year ago, I don't think I would be here."

Quirke had also comes out the right side of a tight finish on The Gradual Slope earlier in the rated novice hurdle.