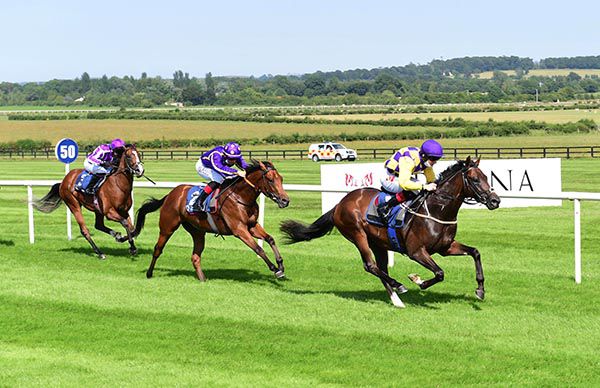 Strong in the market all day before being sent off the 13/8 favourite (from 7/2 in the morning), Recurrent Dream made a winning debut in the Irish Stallion Farms EBF Maiden over six furlongs.

Colin Keane’s mount missed the break but made progress two furlongs out and led entering the final furlong. He came home a length and three quarters in front of Gwan So (15/2) with the easy-to-back Ballydoyle newcomer Hms Endeavour (9/2) back in third.

The winner, by Elzaam, is a full-bother to Indicative Vote who won first time out over ten furlongs for connections last year and was touched off in a Group 3 next time before continuing his career in Hong Kong.

“Vincent (Gaul, owner) had his full-brother last year. We've been very lucky with Elzaam and so has Vincent.

“He ran in this race to get him ready for the Ballyhane Stakes. The biggest thing this year is to try and get €50,000 off Joe Foley seeing as he is by (Ballyhane stallion) Elzaam. That would make our year.

“The way he did it there he's going the right way. He's a lovely horse, we thought the trip would be below his best today and he would lack experience but he showed he's a nice horse.

“He won with his ears pricked. He's a big baby and there is a lot of improvement in him. We look forward to getting him home now and see how much he improves.

“Naas have done a fantastic job and it's beautiful ground.”

Frenetic back on track on better ground

The Ger Lyons-trained Frenetic gave weight and a beating to a good field of sprinters in the Doneraile Handicap at Cork this evening.

Reality proves the Master again at Down Royal

The Joseph O'Brien-trained Master Of Reality bagged back-to-back victories in Her Majesty's Plate at Down Royal this evening with a fine front-running performance.

Pretty Smart gained compensation for a luckless passage on her previous start at Fairyhouse 12 days ago when landing the Fermoy Handicap (div II) at Cork today for trainer Pat Martin and jockey Mikey Sheehy.

Glengarra shows his fortitude in Down Royal

Glengarra was game off the front in the seven furlong juvenile maiden at Down Royal.