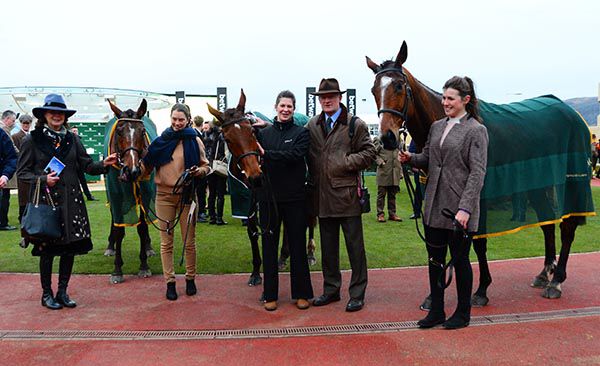 Willie Mullins' trio
© Photo Healy Racing
Relegate came from the clouds to deny stablemate Carefully Selected and provide Willie Mullins with another winner in the Weatherbys Champion Bumper at Cheltenham as he once again dominated the race.

It was a ninth win in the event for the champion trainer but a first for Katie Walsh, who delivered the mare right on the line.

Her brother Ruby was supposed to be riding the narrow runner-up, but had earlier been taken to hospital for X-rays following a fall.

Danny Mullins stole a march at the start on Carefully Selected and right until the dying moments it looked as if it would prove crucial, only for Relegate (25-1), now unbeaten in three starts, to fly up the hill.

Tornado Flyer claimed third to give Mullins a clean sweep.

Walsh said: "This is a fantastic day. I really appreciate it and I'm very lucky to be here to do it."

But the victorious jockey's thoughts were dominated by her brother, who will miss the rest of the meeting after aggravating the broken leg that only saw him return to action last week.

She said: "My heart goes out to Ruby. His bad fortune has turned into a marvellous day for me.

"All I can think of is him, to be honest. Once he's up and he's talking, that's the main thing."

She added: "She's not over-big and I knew she wanted a bit of room.

"When she hit the rising ground, she took off. She's as hard as nails."

Mullins said: "We had planned to run her at Sandown last Saturday, but the owner said we had black type from winning at Leopardstown and we should have a crack at the Champion Bumper.

"I actually thought she was an also-ran and I was right halfway down the back!

"Katie said the further she was going, the better she was going. She couldn't keep up halfway down the back, but then her stamina kicked in and I'm delighted for Katie, who actually sold me the second horse as well."

As well as saddling the first three home, Mullins was responsible for the fifth Blackbow and the seventh Colreevy.

It was his fifth winner of this year's Festival.

"It's a fantastic result. They weren't in the order I thought they'd finish but you never know," he added.

"I think anyone would be happy to have had five winners in two days.

"We've had our ups and downs. It was Ruby out and Katie in."

Barry Connell has had plenty of good winners as an owner but today he made the breakthrough as a trainer with Snake Oil in the bumper at Listowel.

Owners to return on Monday

A limited number of owners are to return to racecourses tomorrow for the first time since March, following Tuesday's announcement by An Taoiseach.

Djingle made the most of his opportunity to win a good pot in the Kerry Group Chase at Listowel.