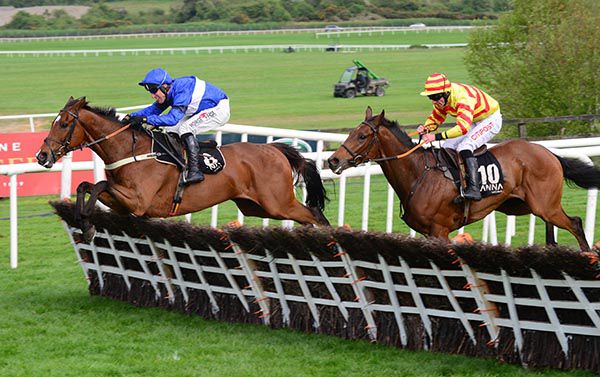 Robbie Power has built up a successful association with the Colin Tizzard yard over the past few seasons, and they teamed up for another Grade 1 victory as Reserve Tank followed up last month’s Aintree win in the Alanna Homes Champion Novice Hurdle.

The Jeremy gelding recorded a 20/1 shock in the Mersey Novices’ Hurdle, and again enjoyed this 2m4f trip as the rapidly improving five-year-old completed a four-timer over the past few months.

Royal Rendezvous ensured a strong pace and built up a sizeable lead early on but that was eroded by halfway, and Reserve Tank struck the front before the third last.

Sams Profile threw down a challenge in the straight but his cause was not helped by a mistake at the final flight, and Reserve Tank held on gamely to score by half a length.

Eglantine Du Seuil was a further length and three quarters away in third. The 11/10 favourite City Island could find no extra after two out and eventually finished sixth.

Tizzard's son and assistant Joe said, “He's a lovely horse. He surprised us at Aintree in all fairness.

“He had terrible ulcers over Christmas and we gave him three months off. He has just improved and improved since. He could be anything, that was a lovely performance tonight.

“It looked a better race than Aintree, perhaps, and he travelled so well. When he won in Sandown he looked a bit slow but he's finding a bit of pace.

“We love using Robbie, he's got his commitments, but when we can get him we get him.

“This horse looks like he's got chaser written all over him and he could be better over a fence. We'll enjoy today, turn him out, but I'd be amazed if he stayed over hurdles — you never know.

“He's a fair horse, a good horse, and he's doing things he probably shouldn't be doing. He could be anything.”

Power said, “All credit goes to the Tizzard team as when he won at Sandown I didn’t think he’d go on and win two Grade 1’s. I got enough of a breather into him down the back that he was just able to get home.”